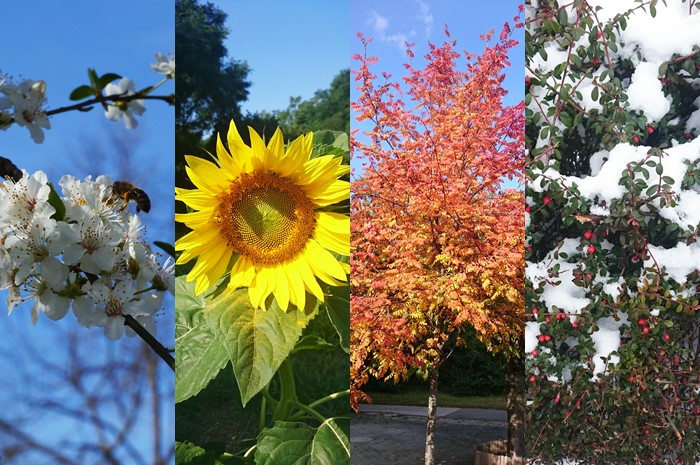 Yes, it’s already one year. Or almost one and a half year since I wrote my last post here. Unbelievable, isn’t it? Facebook would also occasionally tell me how many days went by since the last time I posted something, making me feel even more guilty >.<. Last time I checked it has already been 539 days o_O…

So you readers (and Facebook) might have wondered: What the hell happened to Raya and what did she do all the time? “We all wanted to read more exciting hair stories (in fact I changed my hair quite a lot in the past year) and all about your delicious food!” Or maybe that wasn’t what you were thinking?

Anyway, the answer is quite simple: It’s not like I didn’t want to blog anymore. It’s just that I returned to work after almost 2 years of maternity leave and just couldn’t find the time or energy to just sit down and write. But I decided I want to change that and here I am again (yay!).

Maybe you have noticed that I’ve got a new theme? I finally bought a high-quality theme (up until now I always used free themes, but a paid theme is something completely different o_O). I’m not yet finished with the design and everything, but I think that’ll have to do for now. I will make some smaller or bigger changes from time to time while I explore all the possibilities.

So, for now, let me give you a quick synopsis of all the things that happened in the last 18 months:

As I already mentioned in my last post, I returned to work in mid-March after almost two years of maternity leave. I settled for working part-time, 20 hours a week, from Monday to Friday, 4 hours each in the morning. Since I need around 45 to 50 minutes to/from work, this means Flynn has to stay in the kindergarten for about 6 hours, which I thought is okay. Mostly because he really liked (and fortunately still likes) going to the kindergarten. I will always pick him up by 2 p.m. right after his nap (now he doesn’t nap in the kindergarten anymore, but that’s okay ^,^°). Sometimes it’s a bit stressful to take him to the kindergarten and then straight away continue my way to work and pick him up right after I finished working, but all in all, it’s okay. I’m really lucky that Flynn’s kindergarten is nearby and Tom picks him up once a week as well so I don’t have to hurry back home every day.

On the other hand returning to work wasn’t quite easy for me. While we can be lucky in Austria that we get paid maternity leave for up to 3 years (30 months for one parent most, I chose 20 months) and we can get back our jobs afterwards, unfortunately, I couldn’t work in the same position as the one I have been before I have left. I felt a bit like starting completely back at the beginning again, even if you know so much more and have lots of experience as well. But since then a lot of things changed: I’m able to work in different departments of our store again and that’s why I came to terms with my position in the end for now.

What I like about working again is, first and foremost, that I’m finally earning some money again. I won’t complain about the money I received while I’ve been on maternity leave, but now, even when only working part-time, I, fortunately, get more. The two years were pretty hard for us, and we had to save on a lot of things, especially now that we had a family. Babies just cost some money, even if you only try to buy the most necessary things. The other thing is your daily life balance. While I was together with Flynn pretty much 24/7 for more than one and a half year, even if you love your baby to death, you want to do something else at some point (at least I wanted that). And somehow, and I think most people who don’t have kids and work at the same time won’t believe it, the time at work is like a short tiny “vacation” ^,^°. Anyway, that’s what all the working moms at work and I agree on.

The other thing is your daily life balance. I was pretty much 24/7 together with Flynn for more than one and a half year, and even if you love your baby to death, you want to do something else at some point (at least I wanted that). And somehow, and I think most people who don’t have kids and work at the same time won’t believe it, the time at work is like a short tiny “vacation” ^,^°. Anyway, that’s what all the working moms at work and I agree on.

In June this year, I finally finished playing Fallout 4 after 1 1/2 years, with a play time of 15 real-life days and reaching level 102. Yes, that’s really crazy, I know, so where’s my applause ^,^°? The first ending I watched was the one from the Institute, the second was the Brotherhood of Steel and the last one was the Railroad ending. I wasn’t able to finish the Minutemen quest line because of a bug, but I watched the ending on YouTube (no comment on the endings or any spoilers for now). I really enjoyed playing Fallout 4, even with some bugs on PlayStation 4 (luckily nothing that made the game unplayable) and other flaws, but it was just MY game. I even got the platinum trophy in the end! I will be working on a Fallout 4 post/kind of review in the near future, so stay tuned.

After finishing Fallout 4 I started playing… Fallout: New Vegas XD! Unfortunately, my Steam PC Version didn’t really work well (my game crashed every time I wanted to use my VATS and even the unofficial patches didn’t seem to help), so Tom just bought me the PS3 Version and now I’m playing it on PlayStation 3. It’s pretty different from Fallout 4, and even if the graphics are pretty bad by today’s standards, it still is really fun to play. This game took me only three months to complete, with a play time of 75 hours, but I totally liked it nevertheless. At first, I was a bit overwhelmed by the controls and everything, but with each time I got better and better. Hunting the machines for parts, collecting the artifacts and just discovering the entire world was entertaining. And the graphics are incredibly beautiful. I took so many screenshots of the woods, mountains, sunsets, the moon, and so on. I can’t wait for the DLC Add-on “The Frozen Wilds”. I really want to write something about Horizon, too. And of course, show you all (or some) of my impressive screenshots.

Other than these two games which I played all by myself, I also played some games together with Tom: Final Fantasy XV (meh…), Persona 5 (yay!), Final Fantasy XII The Zodiac Age (not yet finished, but since we finished the original on PS2 it’s not high on our priority list at the moment) and Lego Worlds (surprisingly entertaining and funny).

Then I also bought Tekken 7 earlier this year. And I don’t care what everyone else thinks, I love it! I didn’t really like the other Tekken or Soul Calibur games since Tekken 3 and Soul Calibur 1, but Tekken 7 is great in my opinion, even if there are some characters missing. And I’m not so bad at playing, I did not only beat Tom several times but also some of my friends as well XD (they never thought I would win)!

There’s so much more…

We watched so many great TV series and animes, starting with the Netflix Marvel shows (Daredevil season 2, Luke Cage, Iron Fist and lately The Defenders), Preacher season 1 and the beginning of season 2 and American Gods. But my favorites were Limitless and Lucifer season 1 & 2!!! At first, I was so afraid that the second season of Lucifer just wouldn’t be as good as the first one, but we were positively surprised. At this time we’re watching the second season of Gotham. Soooo exciting!!!

As for animes, we watched The Seven Deadly Sins/Nanatsu no Taizai, which was different but maybe even better from what we thought it was and both seasons of Assassination Classroom/Ansatsu Kyoushitsu. I also watched Kuzu no Honkai (Scum’s Wish) which was…. different, I think ^,^°?

I was also able to finish lots of manga series: (Katekyo Hitman) Reborn!, Claymore, Liar Game, Deadman Wonderland, Soul Eater and Orange just to name a few. But there’s still so much that I have to read! I’m also trying to buy used mangas from time to time to complete older series which aren’t available anymore. It’s like a hunt for rare loot, even for books that aren’t even that old (like 2014). Currently, I’m reading Toriko and even a book as well: Ready Player One by Ernest Cline if I find some time. What’s more??? Hmm, I changed my hair color from my chocolate brown to mahogany red, after that to brown again, then to dark blonde and finally to a pretty short platinum/ash blonde. I’ve never been blonde before in my whole life o_O. I’ll try to write about my hair process soon.

And finally, we had our first family vacation together with Flynn this year. We traveled to the Hotel & Spa Therme Laa in Lower Austria. We spent two nights there and I really want to come back when Flynn is a little older. It#s really easy to travel to just by train from where we live. If I find some time, I want to write some more about our vacation as well. I think these were the most important things that happened last year, in a very, very short flashback. I hope I can find some more time to write about everything and even more in greater detail soon.

Until then, enjoy the first days of fall ^.~!