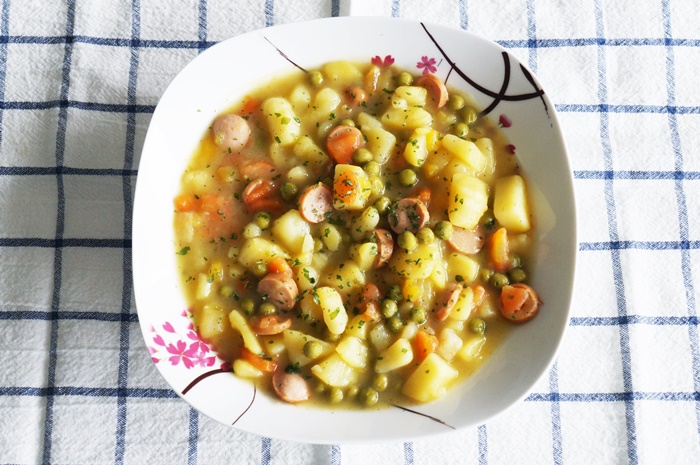 If you’re following my blog for some time now or if you know me personally, you might have already realized my love for food. I really enjoy eating good food, but I also love cooking, especially if I can cook or bake for my family.

I cook almost everything freestyle without any recipe. I have some standard meals that we eat a lot, but I also like to try out new things every now and then. I also attempt to make every meal even better and better with each time, like trying out new herbs and spices or using different kinds of oils.

As you might have noticed my dishes are all pretty down-to-earth and simple. I do actually like to mix different styles and cuisines, but, I’m not one who is totally into all those food trends like using those so-called “superfoods” in everything or cooking low-carb or paleo or whatever it is right now. I don’t think much of any diet until it’s medically necessary, but that’s a topic for another time. We regularly make pizza by ourselves – even the dough and tomato sauce (you can see our first attempts here). Meanwhile, Tom became a pro in preparing a great and delicious dough and we decided that the best toppings besides tomato sauce and cheese are pineapples, mushrooms and of course bacon! You might really be surprised, but it’s not as easy to get sweet potatoes here in Austria. Most stores only have them in stock very irregularly, so you often have to be lucky if you want to have some sweet potatoes. In comparison to normal potatoes they are also more than twice as expensive (up to €2.99 for two medium-sized sweet potatoes, and those aren’t even organic). But when you think about how much more nutritious they are than normal potatoes, it’s okay, and they taste sooooo good! For this dish I combined the sweet potatoes with some zucchini and seasoned the meat Asian inspired with chili flakes, chopped garlic and freshly grated ginger This is just one of my favorite dishes since I was a kid. It’s chicken strips in a creamy sauce with mushrooms and/or peas and/or asparagus (we left out the asparagus, since we both aren’t really fans of it) and then served with rice. So delicious! This wasn’t one of the best meals, but it still looks good, though. I had too little of the teriyaki sauce and the bean sprouts were just completely wishy-washy after cooking. I’ll never buy canned mung bean sprouts again… Since Flynn is still so small and we couldn’t really celebrate New Year’s Eve like we used to (and New Year’s Eve was always my favorite holiday of the whole year together with my family), I wanted to prepare something special for us. After thinking long and hard I came up with the idea of making a paella. It was the first time for me to try this out, but the result was as good as any other paella I ever ate. I read through a lot of recipes, but I kind of created my own style. I cooked the rice (brown Basmati rice, by the way, ^,^°) with some saffron (2 grams are enough to color a whole big baking tray of rice yellow), and then I individually roasted some chicken (or was it turkey, can’t remember), frozen cod and frozen mussels with salt, pepper, garlic and sweet paprika powder. It was the first time I ever made something with mussels by myself. I also roasted some tomato paste with the mussels. I defrosted the peas and put everything in a big baking tray and we put it in the oven on low temperature for some more time to keep it warm. It was great. We ate from it for two days and there was still some left. Now for something less exotic: Our version of a Styrian Potato Salad with field salad, crispy bacon, and pumpkin seed oil. Unfortunately, we couldn’t get any pumpkin seeds that day, so we just left them out. But usually, they add some crisp and taste to the salad. I know that an original Texas chili doesn’t have any beans, but this is my personal style chili. It’s mixed ground meat, roasted with tomato paste, pressed garlic and a special spice blend for chili con carne. Then, in the end, I added some kidney beans, corn, and parsley and served it with rice. This was a meal made out of leftovers. I had some feta and corn left over, then bought the smallest package of pork meat they had at the store, seasoned it with a gyro spice mix and prepared some couscous. Even if it’s a little bit funny in its composition it was pretty tasty.

Also known as Pasta alla Emiliana, I tried to duplicate a meal from a delivery service I really liked. Fresh mushrooms, peas, and ham in a cream sauce served with whole wheat spaghetti. I cooked it without looking up any recipes, but in the end, it came out just like the original, which made me really happy. Just some beef roasted with garlic in a honey-teriyaki marinade from Kikkoman, with broccoli (which absorbed most of the teriyaki sauce XD) and Asian egg noodles. Simple and delicious!

And also, how could you not love those new glass containers from Ikea called Förtrolig. I bought two and they are great. They are microwave-, oven-, freezer- and dishwasher-safe and with the lid attached, they are absolutely leak-safe as well. I love making wraps. I got the idea from a McDonalds Wrap they had some years ago with gyro and tzatziki sauce. I even posted a recipe for this on my former blog. I always change the ingredients a little bit around, like zucchini or cucumber or this time with kidney beans and corn. We now exclusively use whole wheat wraps, because they are more healthy and they actually taste so much better than the normal ones. You should definitely try them out! Last but not least here’s my famous winter stew (yes, it’s still pretty cold here on most days): Greens, potatoes, peas and some frankfurters. That’s all. Well, of course, you need some water for cooking and salt and pepper for seasoning if you’d like to, but that’s it. If you leave out the frankfurters it would be one of the best vegan meals I could think of. I think it came a long way from my first attempt. Again, if your interested in one of these meals, I would be more than happy to share the whole recipe with you. Just write to me or leave a comment.

Which of these meals was your favorite? Do you have any recipe you’d like me to try out because you like it so much?