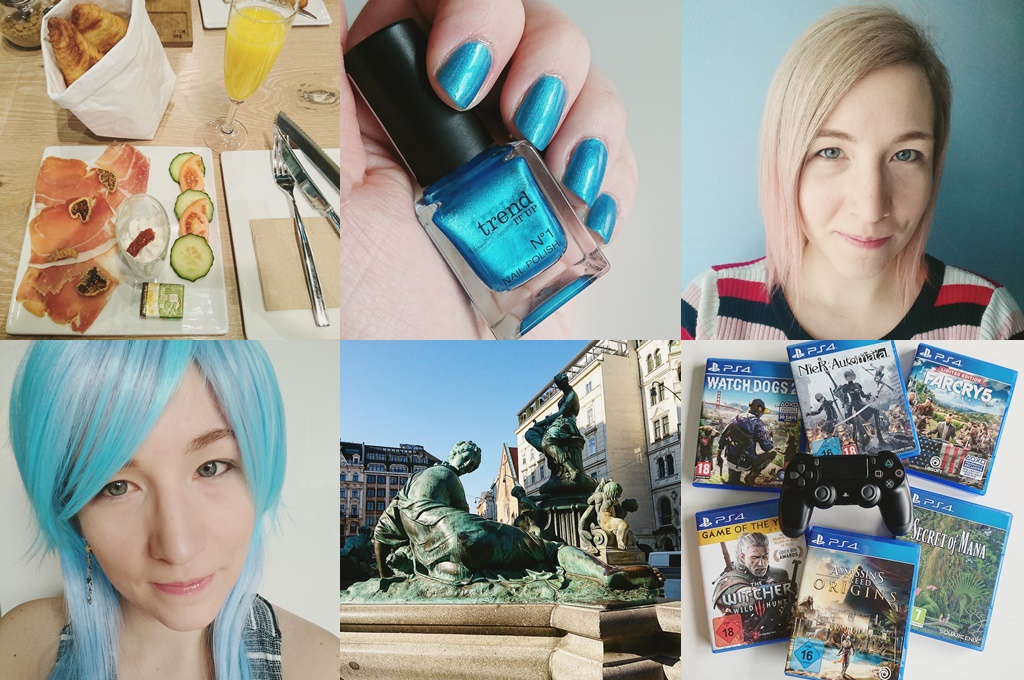 Posted at 21:51h in Daily Life, My Life, Photography by Raya 0 Comments March was a strange month. I was desperately waiting for spring each day, and while there were some nicer days, it still felt like winter most of the time. It was cold and snowing or raining (on warmer days) and every time I looked at photos from the last year, I wondered what’s wrong, like are we trapped in a time hole or in ‘Game of Thrones’ or something like that?

Fortunately, the last week was waaaaay better and it finally started to feel like spring. No winter temperatures anymore and the first blossoms started to bloom ^.^!

Since I haven’t posted anything in such a long time again, I thought it might be nice to give a recap of my Instagram photos from last month, so you can see what I was up to (and the bad weather, too ^_^°…). Be careful, this will be a looooong post! Suddenly there were holo and duochrome nail polishes (and lipglosses and eyeshadows) everywhere. And who was the first one to buy many of the new (limited) edition colors? Yes, it was me…

This here is #060 of the new Holo Nail Polish Collection by ‘trend it up’. Unfortunately, their nail polishes don’t have any fancy names, but since the selection is pretty straightforward it’s okay. I love the lavender shimmer color (not really holo to me, but great nevertheless) and the fact that one bottle is only €2.25! And all the ‘trend it up’ nail polishes I bought until now are really great! Only available at dm. Last month I also ordered some things from amazon.co.jp again. It was my second order already and if someone would have told me that it’s so easy, fast and hassle-free to order something from Japan, I would have done it already sooner!

My first order was just a fashion magazine under €20, so I didn’t have to pay any customs, but this time I bought some more items:

And the big surprise was: The package arrived only 5 days after I ordered it! That’s even faster then some packages from Austria or Germany. I really hope, i can get better at Japanese if I just read some more. I also started to follow some Japanese Instagrammers. Maybe it’ll help? I love buying new wigs in all colors available. I’ve already seen this blonde and turquoise wig somewhere else before, but when I found a listing on amazon for only €18 with prime shipping option, I had to buy it. Buying wigs on amazon is always a bit complicated because there are so many bad ones (even with a great rating >.<), but this was offered by Prettyland and I already bought two good wigs from them, so I hoped for the best. I’m not such a big fan of long straight wigs, but the colors are just so perfect and it looks kind of cool. After Tom and I left from the annual talk with the kindergarten teacher, we decided to get breakfast at Rauwolf. I had the ‘Piccolo Trentino’ breakfast with two croissants, prosciutto, ricotta and an orange juice. Right next to Rauwolf you can find Liesinger Bräu. That’s where I got this fantastic Backhendl with potato salad (two days after we had the breakfast. Can’t afford eating out for breakfast AND lunch on one day ^.^°). Maybe it was the best Backhendl I ever had. The prices are a little bit higher compared to other restaurants, but the portions are big and the dishes are of such a good quality! My manga haul from March. I finally finished buying ‘Blast of Tempest’ with volume 10 and ‘Beelzebub’ with volume 27. I’m just a bit confused that there’s actually a 28th volume of Beelzebub, which was never released in Germany… We also started Übelblatt, which I’m pretty curious about, but at the moment I’m still reading ‘Blast of Tempest’ (volume 5 now). My manga and book backlog is sooo big… Help! Another nail polish by ‘trend it up’. It’s the trend it up No 1 Nail Polish #211. It’s a beautiful metallic blue/turquoise and one of my new favorite shades now. And with € 1.25 it’s even cheaper than the other one (the bottle is a little smaller though). Also only available at dm. I already got my hair bleached and dyed at the end of February, but never came to posting a picture of it on Instagram until a bit later. This time I went with a darker ash blonde to pastel pink ombre. As all the last year, I again visited The Hair Style, and I was so happy with how it turned out. The only thing I forgot was how fast pink (and especially pastel pink) washes out ;_;. I re-dyed it three more times (yes, all by myself without anyone noticing it, haha!), but right now, there really is nothing left of the pink. I ordered a new bottle/tube (what should I call it?) of Directions Pastel Pink now. Homemade teriyaki pork with broccoli and basmati rice. Maybe it doesn’t look that special, but it was delicious! How could anything with teriyaki sauce ever be bad? Another wig from Prettyshop @ amazon, which I’ve seen somewhere else before and which I now finally bought. The design is kind of special: It’s like a short wig with two long pigtails on the side. It has a gradient from turquoise to blue to finally violet at the ends of the pigtails (which you can’t see here in the photo obviously). This one was even only €16 including prime shipping! When I had one day off in March, I went to Szihn to get this salmon bagel and an orange juice for breakfast. You can never go wrong with a salmon bagel, can you? Just a good old Merkur Burger from the Merkur Marktküche. The best thing about it is the garlic dip, hands down ^,^°. On March 17th Tom and I went to the Final Symphony: Music from Final Fantasy concert here in Vienna at the Wiener Konzerthaus. The tickets were actually my birthday present from Tom last year. A big orchestra played rearranged versions of song from Final Fantasy VI, VII, and X. Maybe I’ll find some time to write a little more about it, but just to give you a small review: It was a nice evening, and I didn’t regret going there, but I just didn’t like it as much as I liked Distant Worlds. The best part was the Final Fantasy VII part in my opinion. But either way, the concert hall is gorgeous! This nail polish is essie ‘let it glow’ #535 from the limited ‘desert mirage’ collection. It’s a beautiful coral color with a golden (or copper) shimmer. I love it! I prefer darker polishes, but I thought this was pretty perfect with my pink hair! A homemade pineapple curry with pork and basmati rice. It was pretty easy to make but sooo delicious! I love curry, but after cooking and eating everything just smells like curry. I always have the feeling I smell like it for at least two days and the apartment for an even longer time (I’m very sensitive to smells >.<). Ohhhhh, finally a sunny day! I took this photo of the St. Stephen’s Cathedral at one morning, while on my way to work. I like how the sun gets reflected from the windows of the Haas Haus. Same day. Here we have the statue of the personified river Ybbs sitting on the Donnerbrunnen at Neuer Markt. I cross it twice each day while on my way to/from work, and I’m still fascinated by it. I especially like the lighting here with the deep morning sun here shining through the Donnergasse. Here you can see the stunning art installation ‘Ordinary Life’ by Shourouk at the Swarovski Kristallwelten Store Wien. Over 150 kilograms of Swarovski crystals were used in crystallizing everyday goods like bottles, cans or other packages! The photo doesn’t do it any justice, it just looks so much more sparkling, when you see it by yourself.

After a long, long winter, the Vienna Woods look kind of dead… I took this photo from the Waldmühle Rodaun, where we visited some friends and their daughters together with Flynn. Can you believe that this is still actually in Vienna? At least the part we are standing at, the hills are in Perchtoldsdorf/Lower Austria. And the last nail polish presentation for today: ‘miss undercover’ by ANNY #370.10. I saw it on the ANNY Facebook page, but I was afraid I could never get it. After Douglas discontinued ANNY here in Austria (at least I haven’t seen them anywhere anymore), I’m so happy, that you can now get them at Müller. And in fact, I bought it at Müller when I had the first chance to look for it! ‘miss undercover’ is a metallic green shade with a gold to blue shimmer, similar to how scarab beetles look like. Nice green shades are so rare, so I’m really happy. So many great games were released in the last months. Which should I play first? And there are still so many more that will be released later this year, like Ni no Kuni II (haven’t bought it yet), God of War or Detroit, just to name a few. Currently, I’m still playing Assassin’s Creed Origins. I already finished the main game with the platinum trophy and the first DLC ‘The Hidden Ones’ with 100%. Now I’m still playing the second DLC ‘Curse of the Pharaohs’, which might be the best part of the game. Disclaimer: Watch Dogs 2 is just borrowed from a friend ^,^°. Morning sun, trees and a train in the background. It was so rare to see the sun that I had to take a picture every time it was actually visible ^.^°. And finally: A view from the Kärntner Straße to the Vienna State Opera House with Cafe Sacher in front and a very cloudy sky taken after work.

The End. It’s over! What do you think about my Instagram Photo recap of March 2018? If you want to see more photos and be always up-to-date, you can follow me on Instagram @Kirayuzu.

What did you do in March?