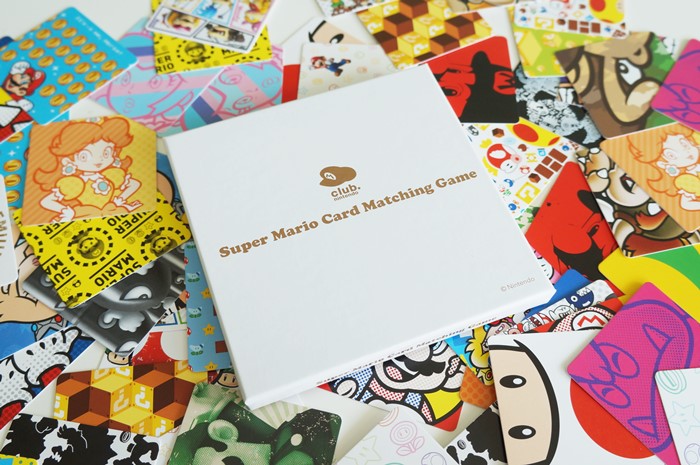 Posted at 15:30h in Board Games, Collectibles by Raya 0 Comments

Last year Nintendo’s loyalty program Club Nintendo closed and before all our coins which we collected over all those years with our Wii, WiiU, DS and 3DS games, were gone for good, we had to cash them in for some rewards. You could get download codes for games, or special 3DS backgrounds, but we rather wanted to have some physical item.

There were all kinds of stuff available over the years like pouches, coaster sets, game soundtracks or a Yoshi egg backpack, but with the coins we had, we decided to get the Club Nintendo exclusive Super Mario Card Matching Game, which looked really promising. Not long after our “order” and the closing of Club Nintendo we received the game and were surprised:

Everything comes in a nice white-golden box. Inside you can not only find 60 cards (with 30 different designs, as this is a Concentration/Memory game, where you have to find the two matching cards while they are all turned over) and a small introduction folder how to play the game in multiple languages. I always liked playing Memory as a kid, maybe because you could also play it just by yourself if you want to ^,^°. You can say anything you want, but I love the artworks. Just take a look at them! You can find everyone on them: from Mario to Luigi, Princess Peach, Daisy and Rosalina, Wario and Bowser, the Koopalings and other enemies, and there’s even one Donkey Kong Card! The designs differ from card to card, but they are all so cool and colorful and many have a lot of little details on them. I especially like the Pop Art ones. I think they would all make great avatars for forums or the like.

Yay, I finally found a pair! Playing with all 60 cards is really hard, but you could also vary the number of cards to play with, according to the number of players or difficulty, as the introduction suggests. For the moment, I’ll keep them hidden away safely because they are so rare and special, but I can’t wait to play it together with Tom and Flynn when he’s a little bit older.

What do you think about this Super Mario Card Matching Game? Did you ever get anything from the Club Nintendo loyalty program?

This website uses cookies to improve your experience while you navigate through the website. Out of these, the cookies that are categorized as necessary are stored on your browser as they are essential for the working of basic functionalities of the website. We also use third-party cookies that help us analyze and understand how you use this website. These cookies will be stored in your browser only with your consent. You also have the option to opt-out of these cookies. But opting out of some of these cookies may affect your browsing experience.
Necessary Always Enabled
Necessary cookies are absolutely essential for the website to function properly. This category only includes cookies that ensures basic functionalities and security features of the website. These cookies do not store any personal information.
Non-necessary
Any cookies that may not be particularly necessary for the website to function and is used specifically to collect user personal data via analytics, ads, other embedded contents are termed as non-necessary cookies. It is mandatory to procure user consent prior to running these cookies on your website.
SAVE & ACCEPT