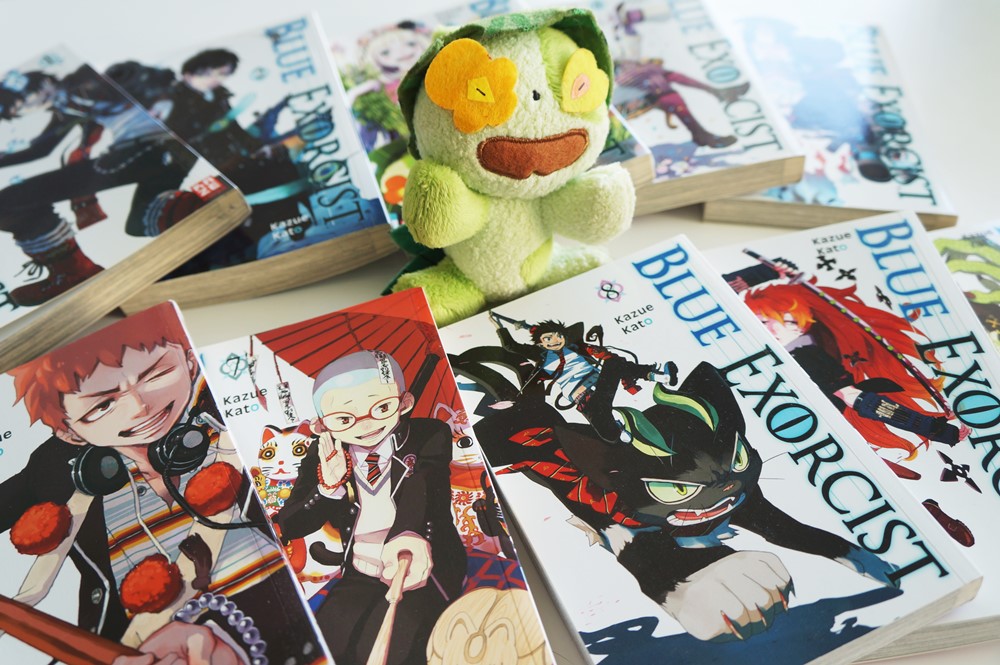 Posted at 21:35h in Conventions, Daily Life by Raya 0 Comments Yay, finally! When I first heard about how the first Vienna Comic Con will be held in November 2015 earlier this year in May (I think it was May), I couldn’t believe we’ll be having our first real Comic Con here in Vienna. I was really excited, but I just thought it’ll be taking ages until the weekend will be here eventually. But now it’s here!

Vienna Comic Con (VIECC) is organized by ReedPop, the same people who are also responsible for other great events such as the New York Comic Con, PAX and more. When thinking about New York Comic Con I always get a little bit sad, because back in 2012 Tom and I planned to actually visit New York and NYCC. We already had bought our flights, we booked our hotel, we also had 4-day tickets for the whole event. But since I was really not feeling well at that time, we decided to cancel the trip two weeks before we would have traveled. I still feel bad about it, because we lost all the money for the flights and couldn’t use our tickets ;_;…

So now I thought I’ll be finally able to make up for not being able to attend New York Comic Con. I was waiting and waiting for them to put up the tickets for sale. I was a little bit scared we might not be able to get any weekend tickets if we are too late (just like in the episode of The Big Bang Theory where the boys tried to get Comic Con tickets and they were sold out faster than they could refresh their browsers ^,^°). That’s why I bought our weekend tickets within 10 minutes after they released them in July. In the end, I wouldn’t have had to be so fast because it took some time until they were sold out after all, but better safe than sorry! The tickets were €41 for each one of us and together with the additional fees like shipping and handling fees we paid €90,95. Quite a bit expensive, especially the additional fees, but we really wanted to go. Just a few days later I received my tickets in the mail with which we can pick up our badges at the exhibition hall. 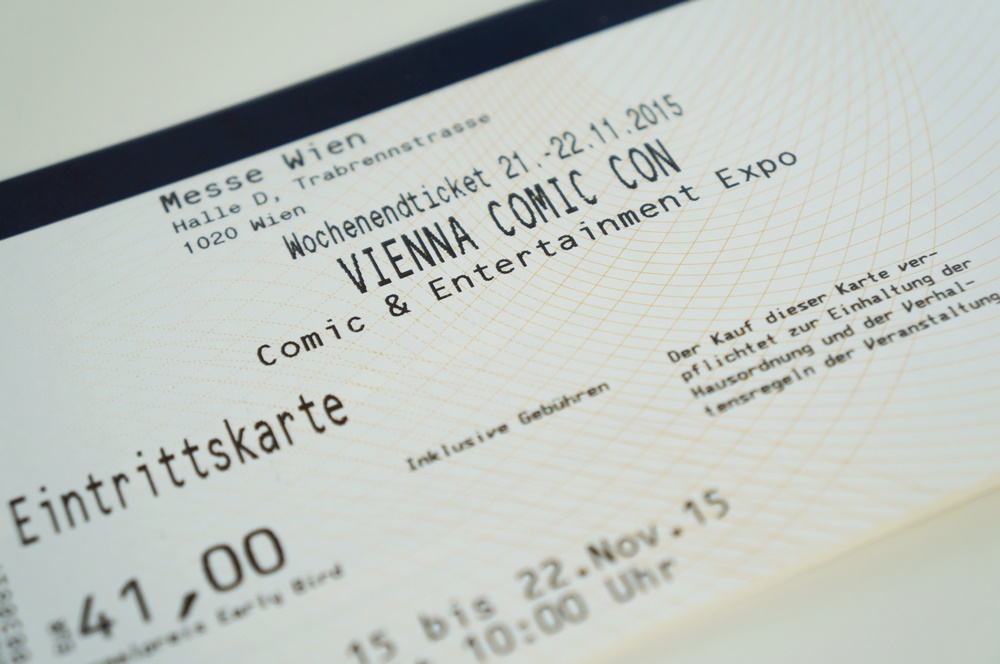 So from time to time they announced some actors, comic artists, cosplayers and more guests which will attend VIECC. But from what they announced (until now at least) I’m not overwhelmed. I mean the guests are nice and all (the Game of Thrones actors are pretty cool, but they don’t play any of the main characters if you know what I mean), and I don’t want to sound ungrateful but I really thought there would be some more popular people like in other conventions such as the NYCC. It was always clear to me that there wouldn’t be dozens of famous actors or stars, but at least two or three really special star guests would have been nice. I could think of a thousand people who would have been totally awesome. Maybe there are some secret guests which they haven’t announced yet, but I don’t really think so. With that in mind, you feel a little bit like a second class fan here in Europe.

But I’m still totally excited and looking forward to it. I really like the fact that it all will take place at the Messe Wien, Vienna’s main fairground. It’s easy to get to, pretty big (however it’s the smallest hall) and not as dark as other convention places @_@. If you’ve been born and grown up in Hanover/Germany and have been going to all the exhibitions like the CeBIT, Hanover fair and also the Expo 2000 from being a baby on, you’ll find Vienna’s fairground still pretty small, but that’s okay. It’s the first time that it takes place here after all.

Most of Tom’s friends will be coming as well, so I hope we’ll have lots of fun. Our friend Gabriel from cerealkillerz.org will even have his own stand with K.I.T.T from Knight Rider and cosplay events! But now to the biggest question: What to wear? We really don’t have any spare money for new cosplay costumes or outfits, so we have to go with something we already have. I was thinking about wearing my Shiemi Moriyama cosplay from Ao no Exorcist (Blue Exorcist), which I’ve already been wearing at AniNite 2013. Since it was only a Friday and not many people saw it I think it’s okay to wear it once again. It’s also great for the colder season, you can add additional layers under her kimono. While we still had sun and 20°C (and storm) today, it’s going to be below 10°C this weekend (at least according to the weather forecast).

I recently started to re-read Ao no Exorcist again. I started reading it first as a scanlation (I know, I’m a bad girl, but as you can see I bought them now, so it’s all good!) when there was only one volume out, with about one new chapter each month up to around volume 10 I think, then I stopped, because I had so many other manga to read (I know, serious business). I also watched the whole anime but found it really strange from the second half on after they strayed too much from the manga story >.<. But all in all, I like the story and I especially love all the characters. 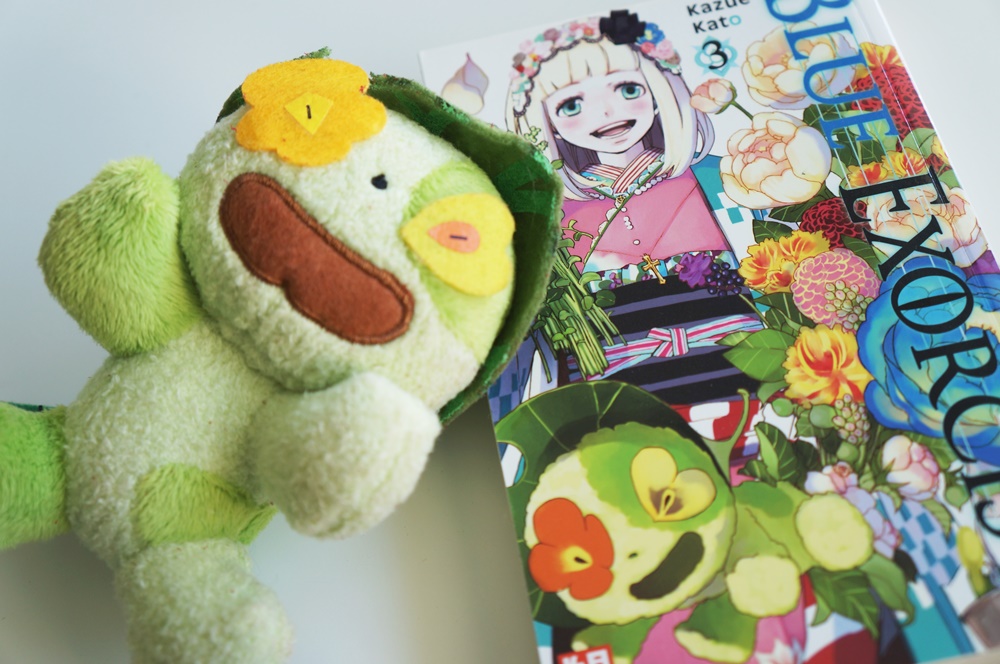 On the other day I think I’m going for a Lolita outfit, but I’m still not sure which one. Maybe I’ll go with my Wa Lolita outfit again because I love it so much. But maybe it’ll be another one. I really have to think about it until Friday XD. I also thought about an Until Dawn cosplay at first (with me as Ashley and Tom as Chris XD, we could just buy normal clothing and wouldn’t even have to wear any wigs!), which would have been really cool and funny, with a little bit of dirt and blood here and there but we scrapped the idea soon.

If you’re living in or near Vienna, what do you think about Vienna Comic Con? Will you be coming, too?

I’ll, of course, be taking many photos and report on it next week or so.