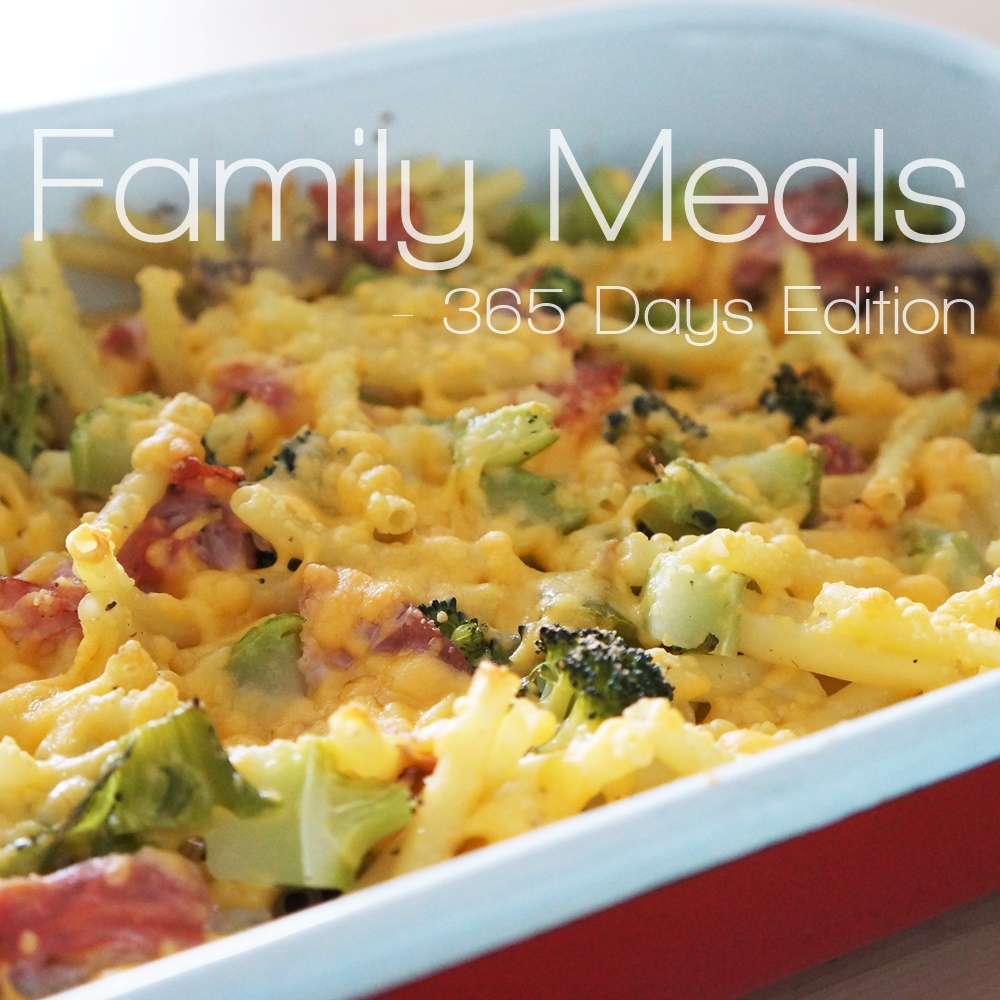 Cooking with a small baby at home is near impossible. Especially the first months were really hard for me, but even now with a 13 month old toddler, it’s still a challenge to find the time to cook and bake when I’m alone with Flynn. However sometimes I actually am able to make some great meals or cakes. And of course it’s getting better the older Flynn grows.

So today I want to continue showing you some of our family meals from the last 12 months. At least the ones that I took photos of and that are acceptable to show you. The last post like this was only two weeks before Flynn’s birth, so this post picks up where I left off.

Okay, now brace yourselves, this is going to be delicious and image heavy: 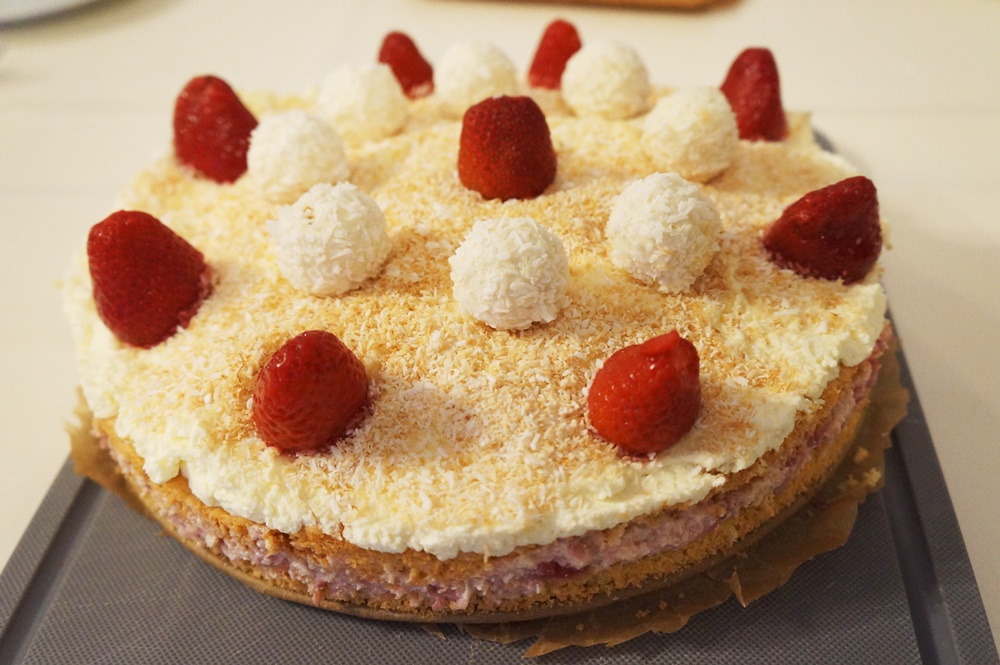 Last year I wanted to bake something special for Tom’s birthday. I love the Maulwurftorten (mole cakes?) and apple tartes I always made for him, but now it was time for a new cake! I was checking the internet for a good recipe and then I found this Strawberry Raffaello Cake (recipe in German). In my opinion this was the best cake I ever baked. 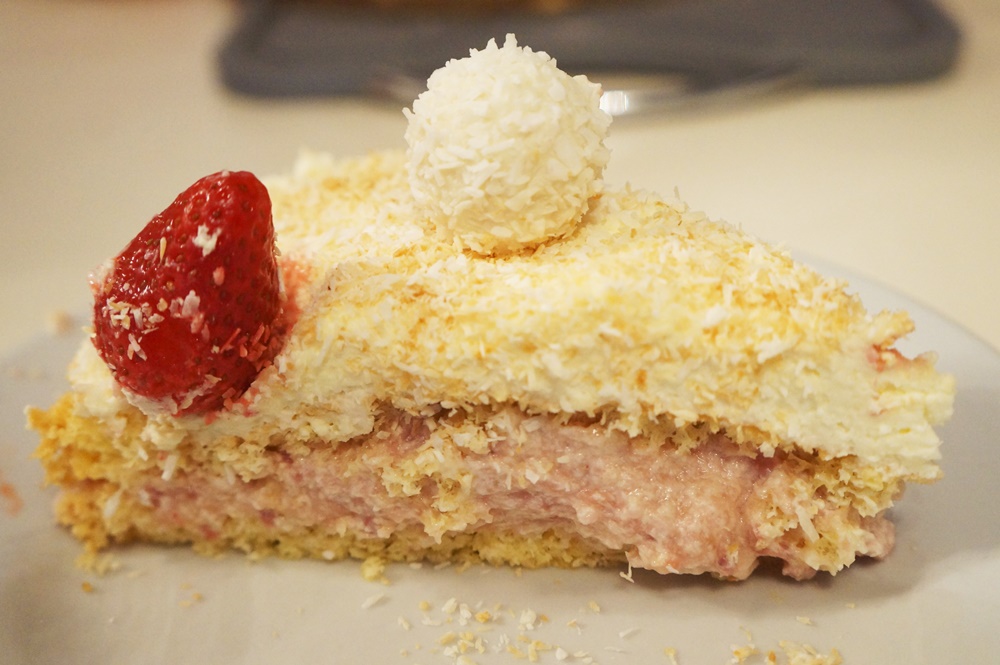 My cake might not look as good as those other people had made (at least from what I saw as photos on the website), but this is so delicious! I ate a lot of this cake by myself, because it’s just so perfect. The sweetness of strawberries and the lightness of coconut flakes and fluffiness of the soft cake and the creaminess of the cream… I still think that it tasted like it was bought from a pastry shop. 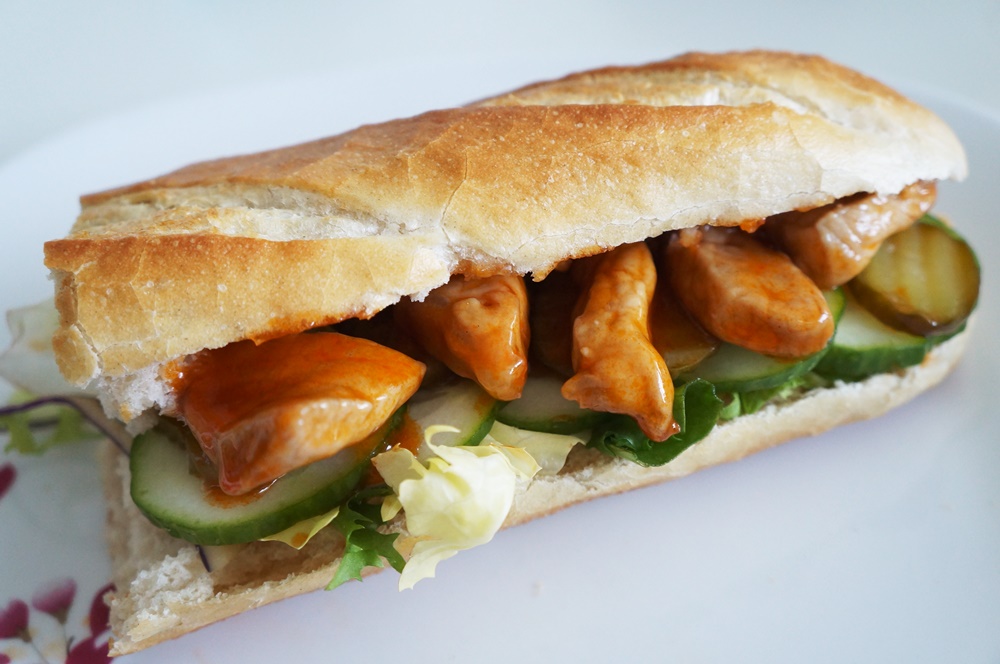 We were craving some Subway sandwiches, so we decided to make something similar by ourselves: One half of a baguette, some sweet-sour marinated pork meat (it was a ready-made sauce), some salad, cucumber slices and pickles. Not exactly the same as a Subway sandwich, but nevertheless really good. So easy, so tasty! 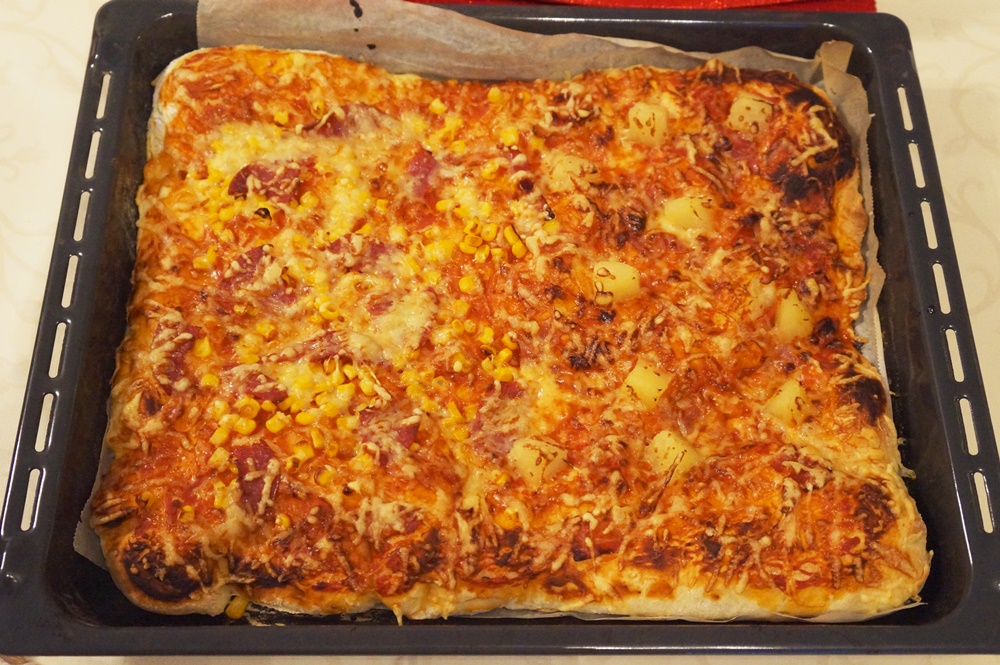 On New Year’s Eve last year we couldn’t really do anything, because Flynn was still so small, so we had to stay at home. On the evening though we went over to Tom’s mother and made some Pizza. But this time we decided to make our own dough, and this was our first try. It really isn’t hard to make pizza dough by yourself. You just have to use a good recipe. Tom made the dough and I as always made the tomato sauce (which is also dead easy). We had enough dough for a whole baking tray and then we still had enough left for the next day. 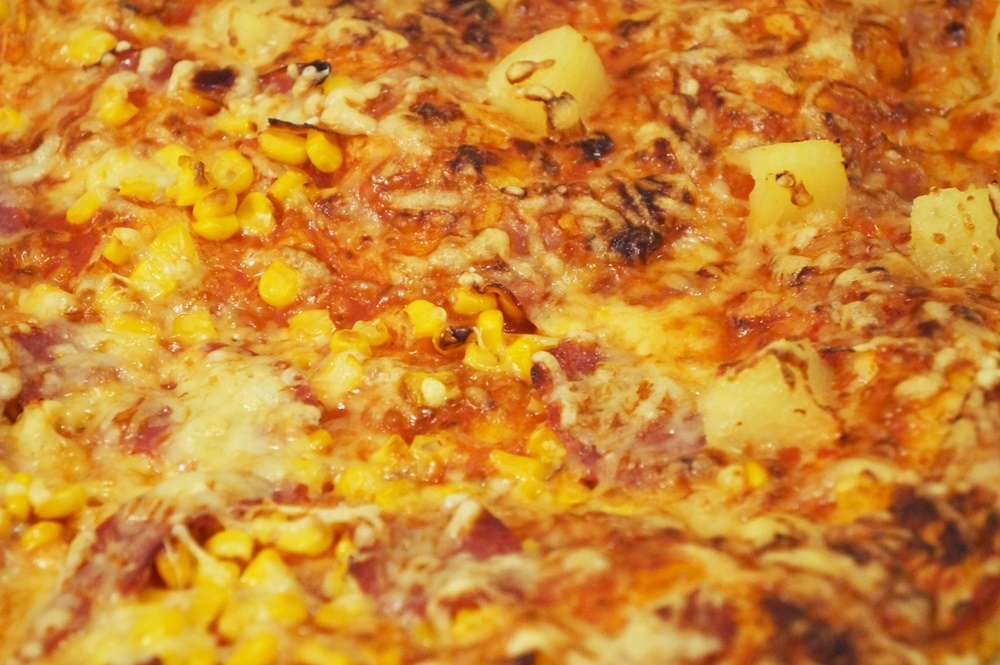 On one half we put some bacon and corn on the dough with tomato sauce and on the other half some diced pineapple pieces. Then we sprinkled some grated cheese on top. I’m really sorry for anyone who might feel offended by pizza with corn. I already received one rude remark on one of my Flickr photos some time ago.  I know that this is not original, but I think most people here in Austria (or Germany for that matter) like corn on their pizza. At least I don’t know anyone here, who doesn’t like it. I think it gives a hint of sweetness to an otherwise salty or a bit sour (depends on the tomato sauce) taste. 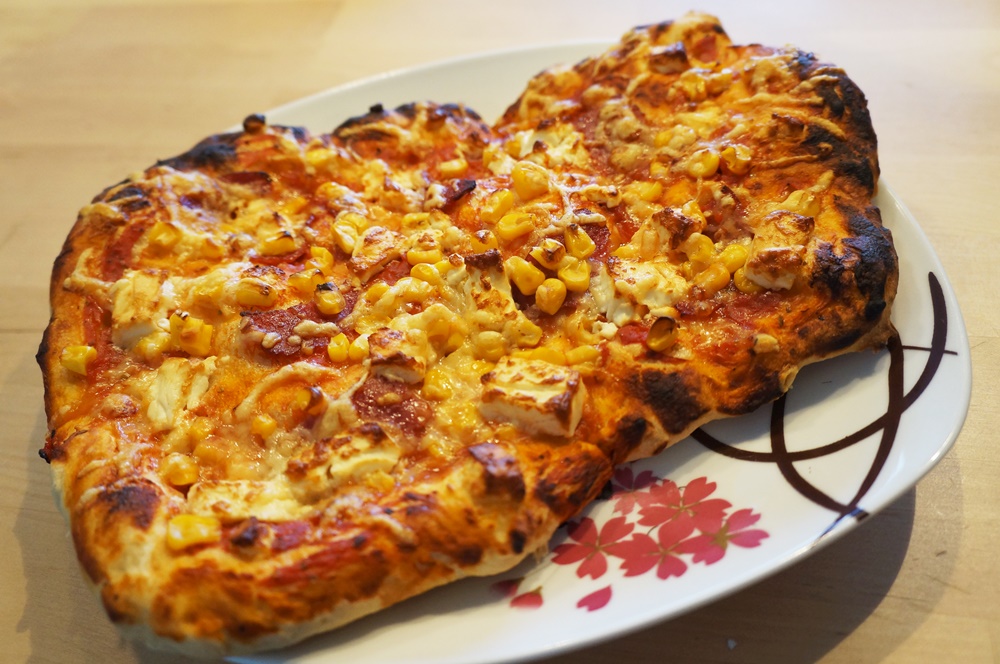 So on New Year’s Day we had the rest of the pizza for lunch. Tom made two smaller pizzas for each of us. The problem with this dough was that it was really hard to form into a good shape, so this came out in the end. So from this time on we decided to never buy ready-made frozen pizza again. It’s so much better and even cheaper to do it by yourself. 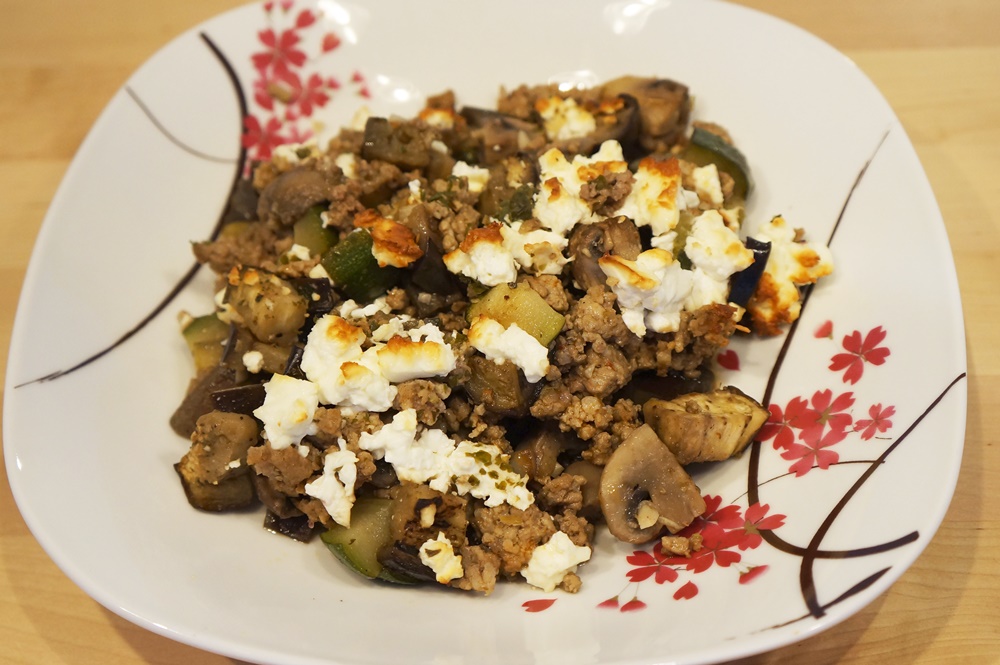 Get some ground meat and roast it for some time. Then put everything into a baking pan together with mushrooms, zucchini and eggplants. Then season with some herbs and spices, crumble some feta over everything and put it into the oven. This was a great meal I prepared on the evening in advance and then I had it for lunch on the following two days. 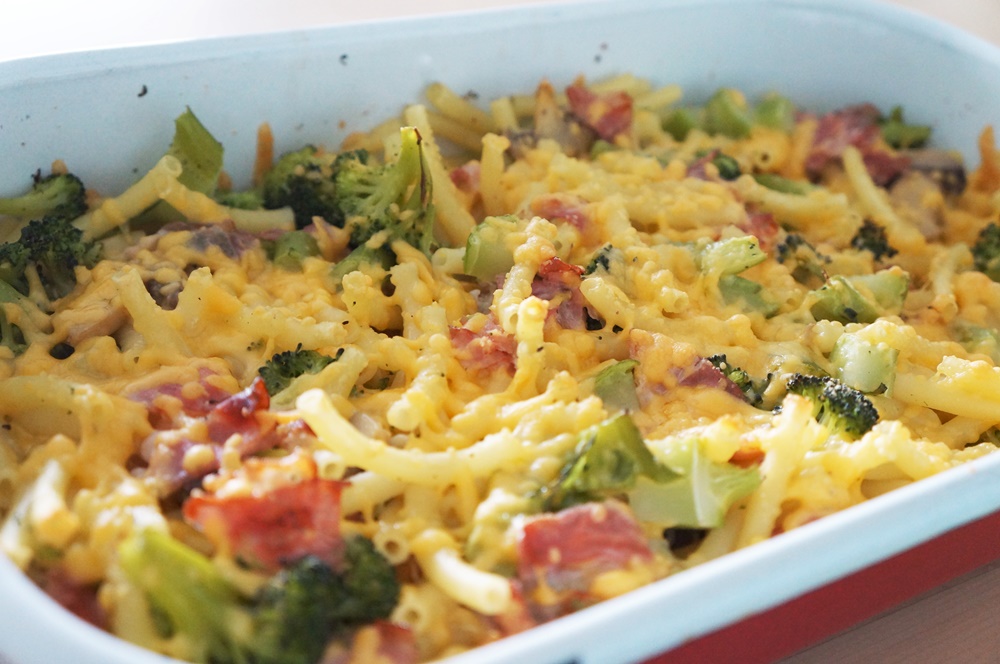 I’ve wanted to make some mac and cheese for a long time, but just noodles with cheese seemed too easy. So I added some broccoli, mushrooms and bacon for more taste and color (and vitamins XD). 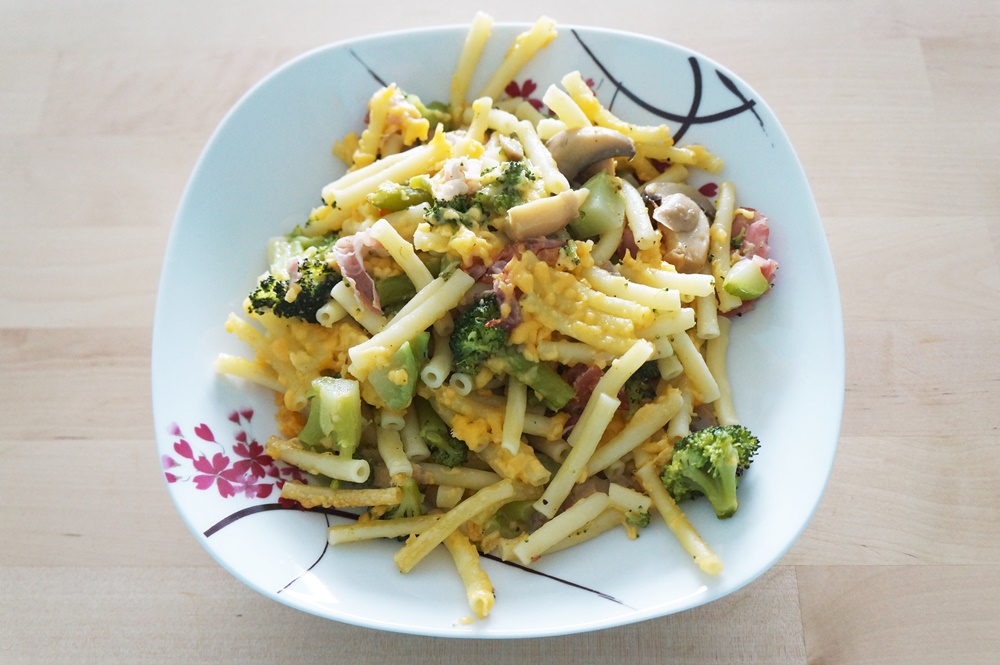 Om nom! I could eat something like that every day. 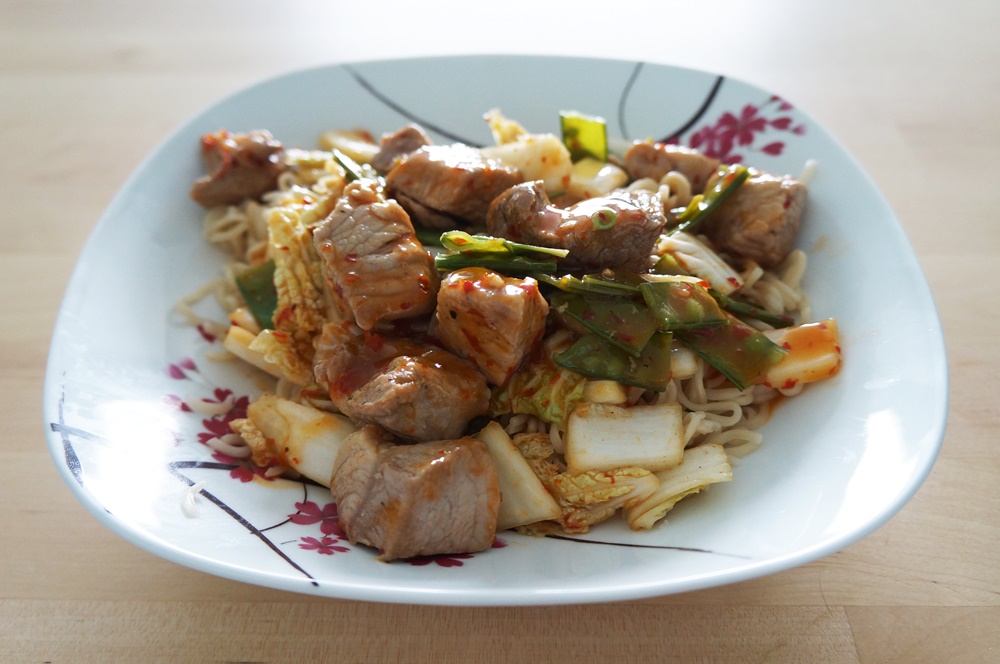 Okay, this was absolutely delicious! The meat wasn’t the best quality, but the noodles and the cabbage with the asian chili sauce (with plums, we bought it) were a great combination. I prepared the chinese cabbage like how you would make kimchi, with salt, sugar, garlic, chili, fish sauce and so on, but without the long wait time for fermenting. 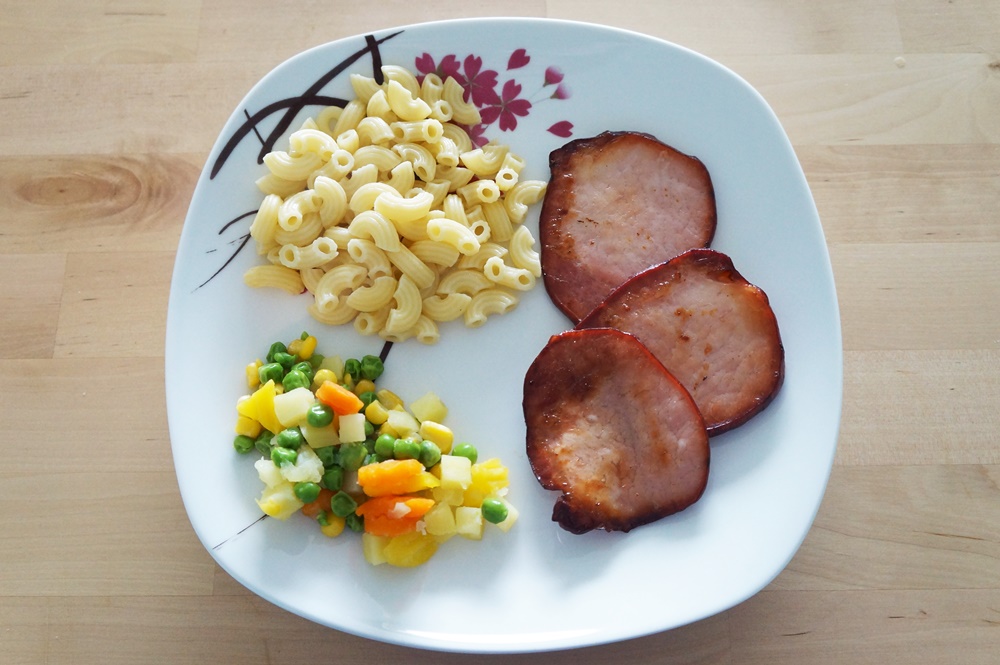 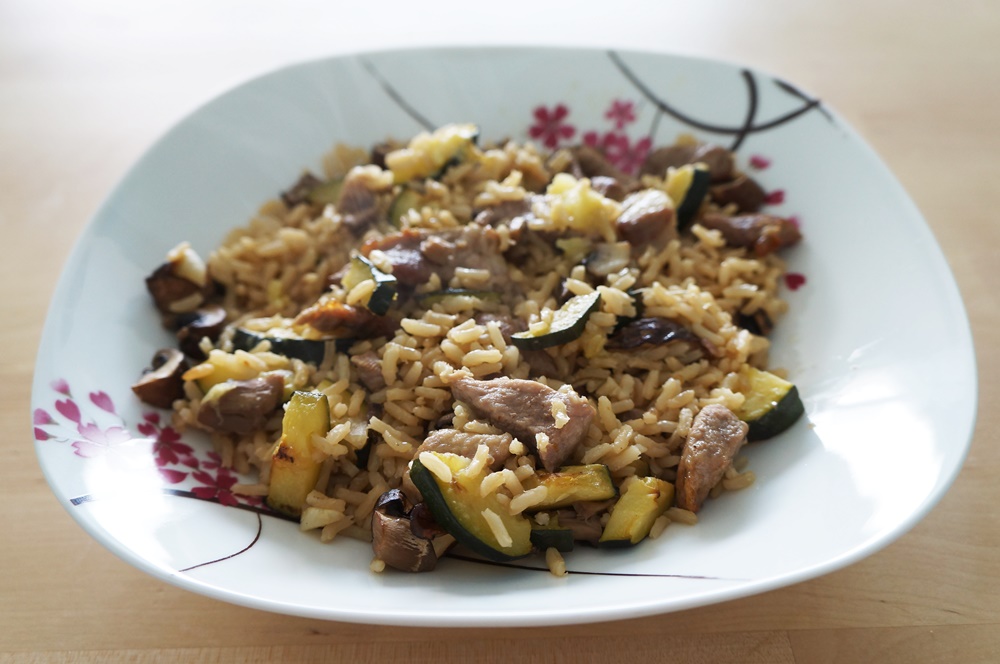 Tom got the idea for this dish while watching a tv cooking show, I can’t really remember which, maybe one of the River Cottage Shows with Hugh Fearnley-Whittingstall…? Tom says yes. The special part about this meal is, that the rice is cooked together with the vegetables with a lot of broth in the oven, similar to a risotto, but without having to stir the rice all the time. It isn’t that sticky, but the flavour of the rice is really intense. Just put it into the oven until the rice absorbed all the broth and you’re finished. We used brown rice, but I think every rice is okay. Really good and simple, too.

Asian Noodles with Pork, Peas and Peanut Sauce (May 2015) 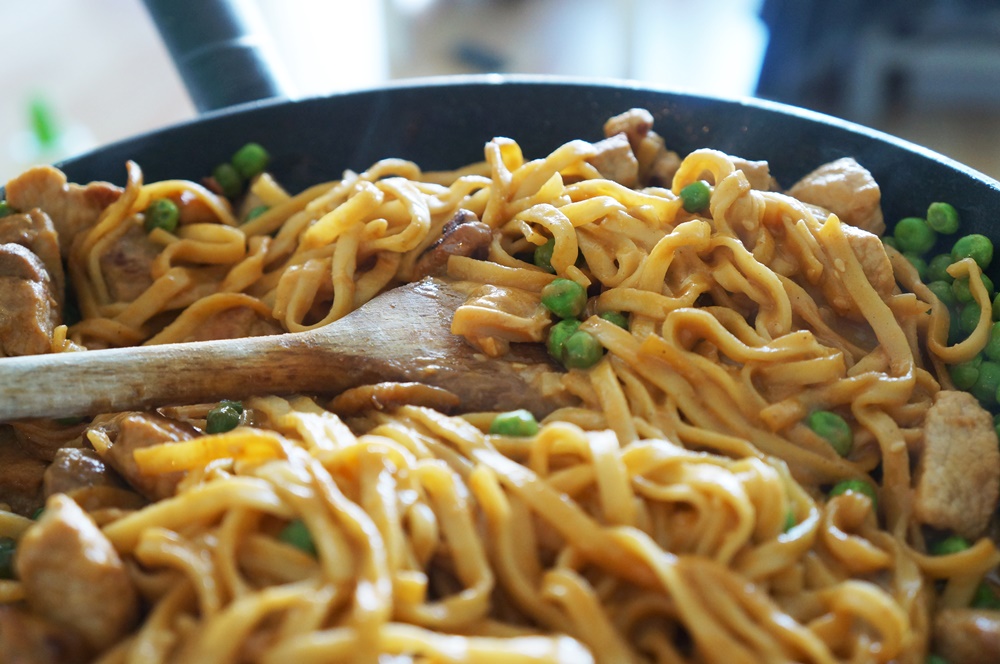 This looks so good, and the taste was great as well. I know, we eat a lot of pork meat, but it’s my favorite and it’s not as expensive as beef (and sometimes even as poultry o_O). We bought an asian peanut sauce but Tom added some extra peanut butter to make it even more creamy and nutty. Together with some peas and some asian noodles in the pan and you have a wonderful meal. 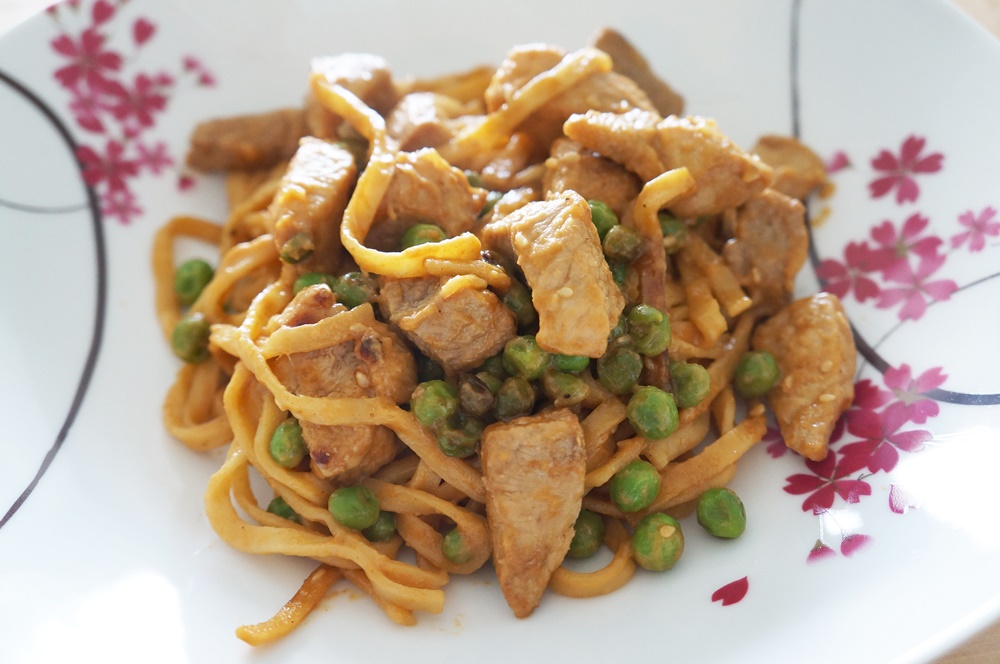 Handmade Pizza with another Dough (June 2015) 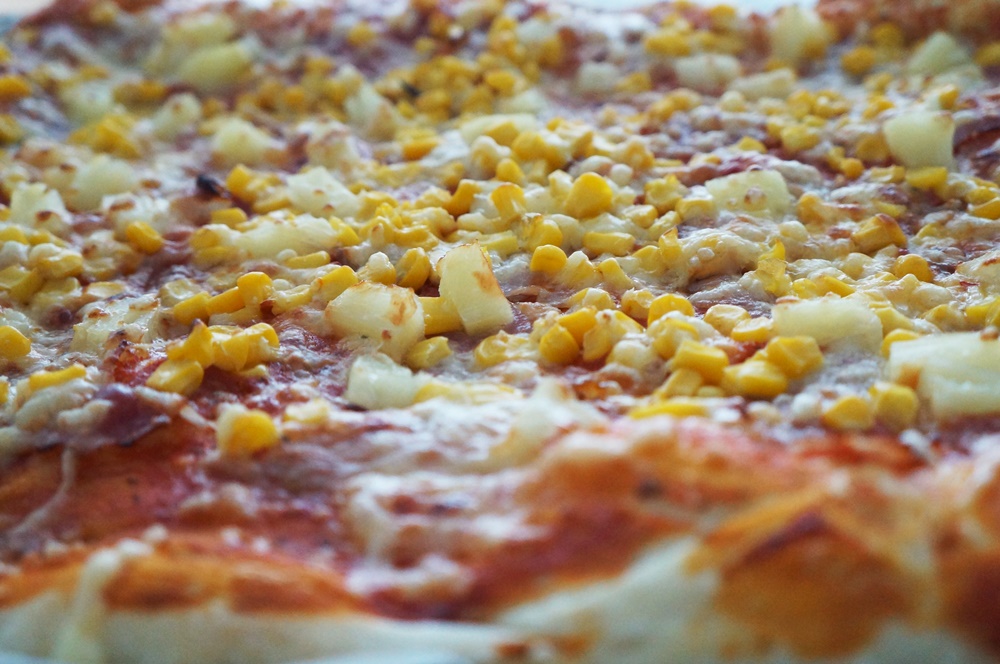 This time we used another recipe for the dough (recipe in german) and it’s just perfect. The dough is tasty, easy to form and it’s just the right amount for one baking tray. And the best is: You can prepare it in advance. This time we used handmade potato sauce, corn, bacon and grated cheese (our basic ingredients) as the topping. 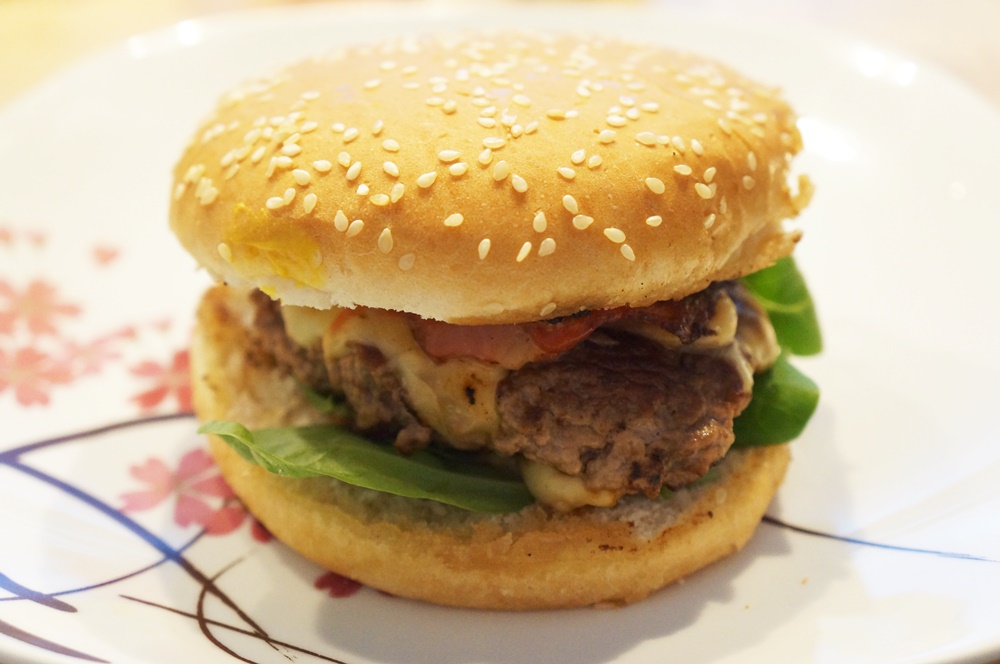 We found some bigger burger buns than the ones you usually get a the supermarket so we had to make our own hamburgers again. This is just a simple Bacon Cheese Burger with salad, ketchup and american mustard. 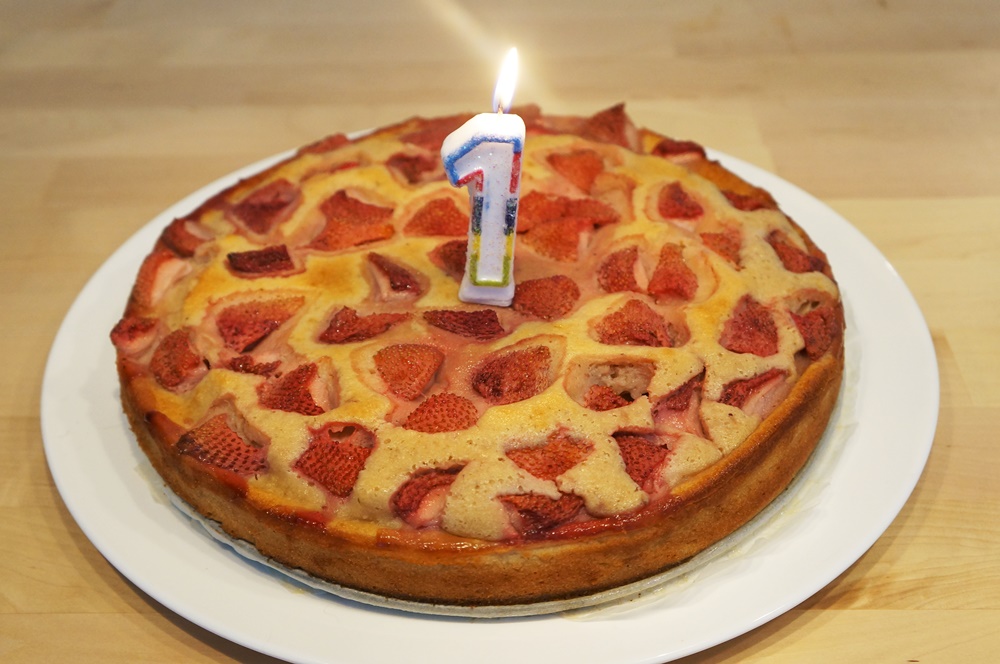 Some weeks before Flynn’s first birthday I started to plan his birthday cake. I wanted him to be able to eat a bit of it, too, so I had to find a recipe without or with less sugar, which wasn’t as easy as I thought it would be. I not into all those substitute products (like vegan substitutes or similar), so I just thought about something by myself. I used this recipe for a strawberry cake (strawberries are Flynn’s favorite fruits, maybe his number one favorite food ), left out the chocolate and changed 100 grams of sugar to 100 grams mashed bananas. I wasn’t sure about it, but in the end it worked! 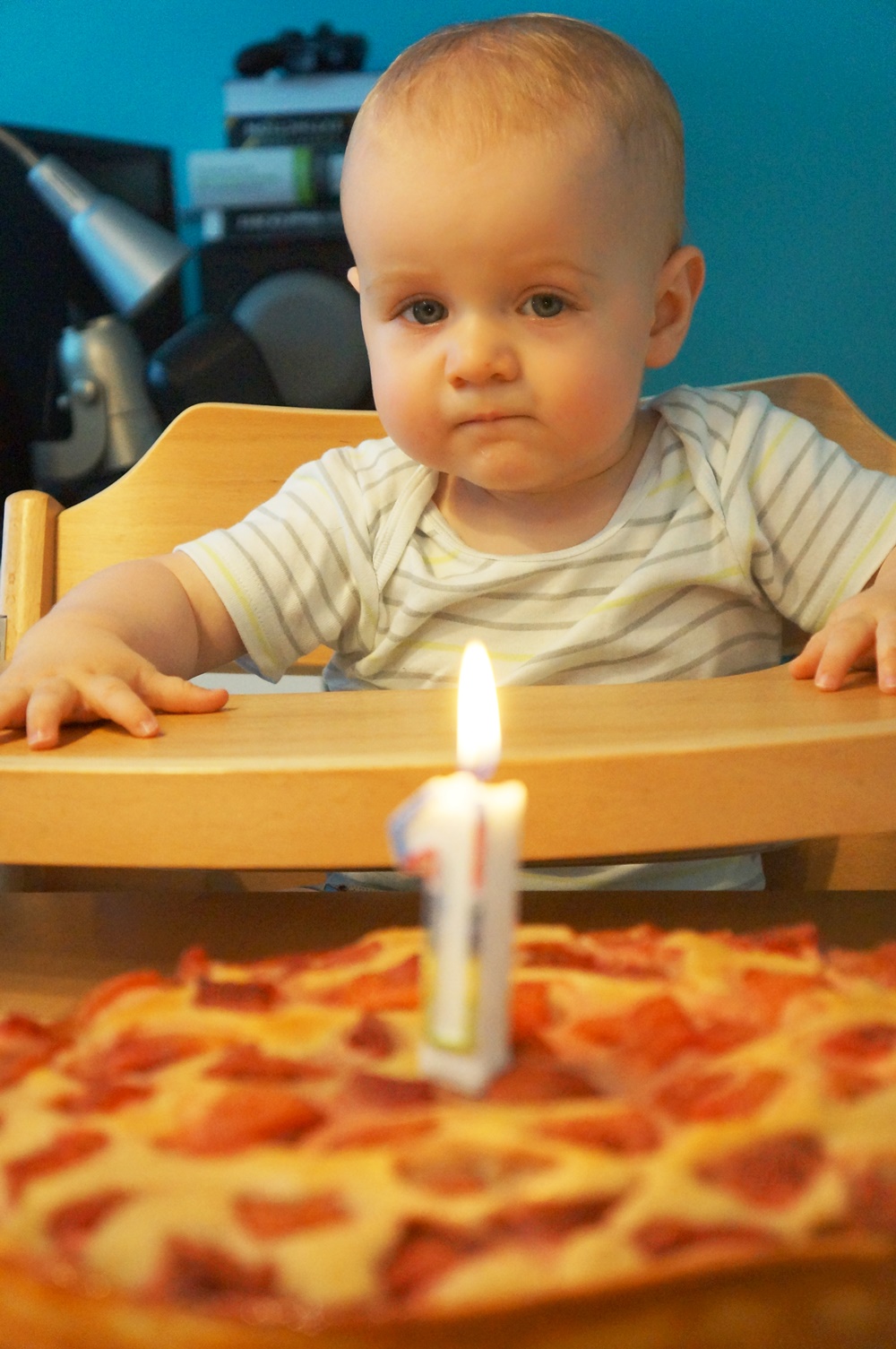 Flynn wasn’t that enthusiastic about it (as you can see), but all the guests liked it. 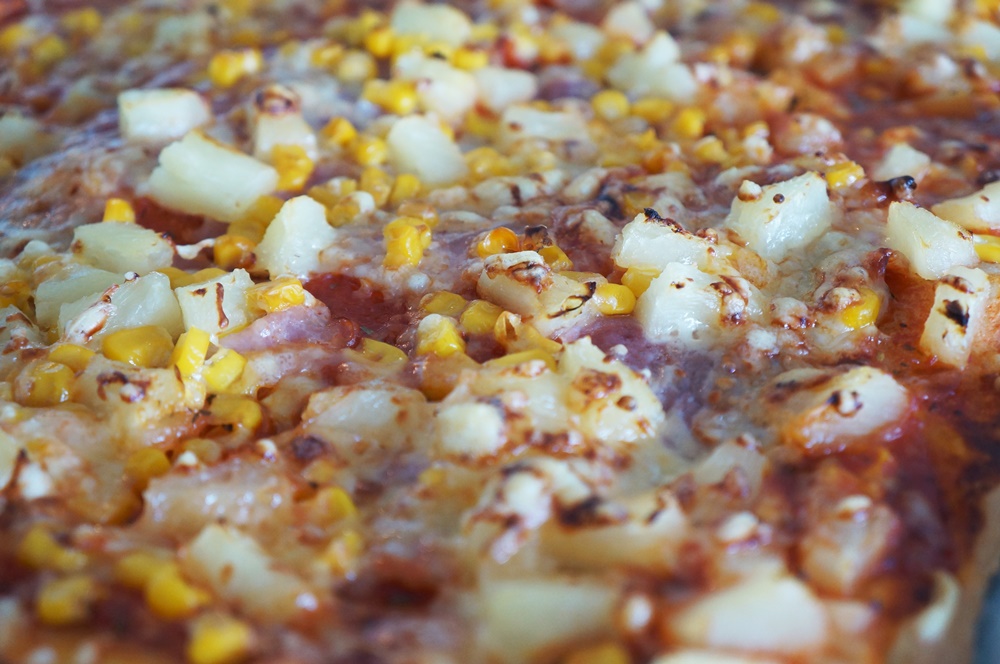 Another pizza with our special dough and favorite toppings. It’s getting better and better each time! 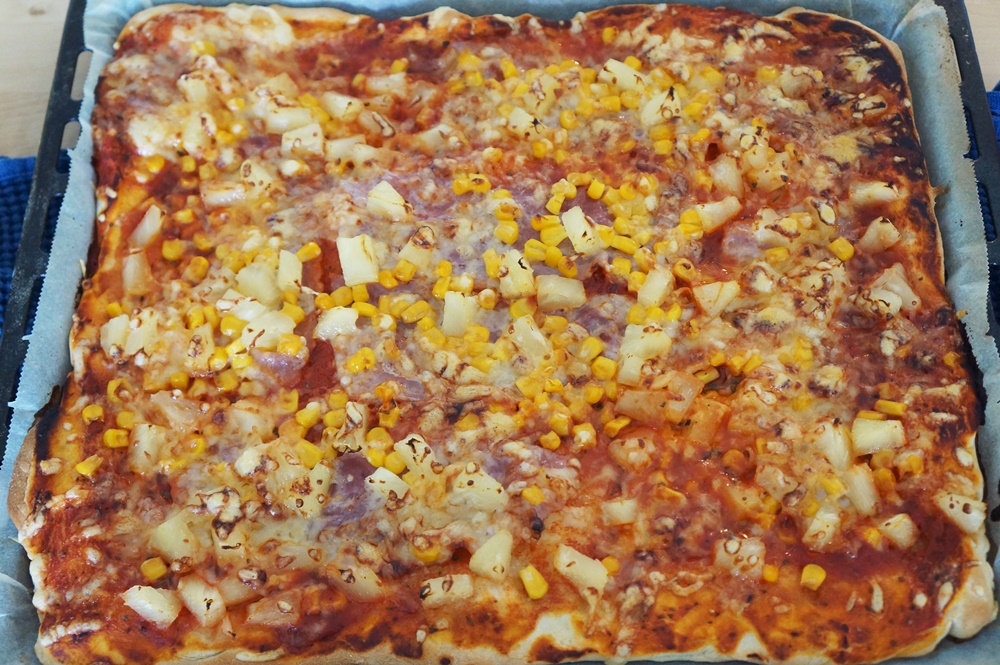 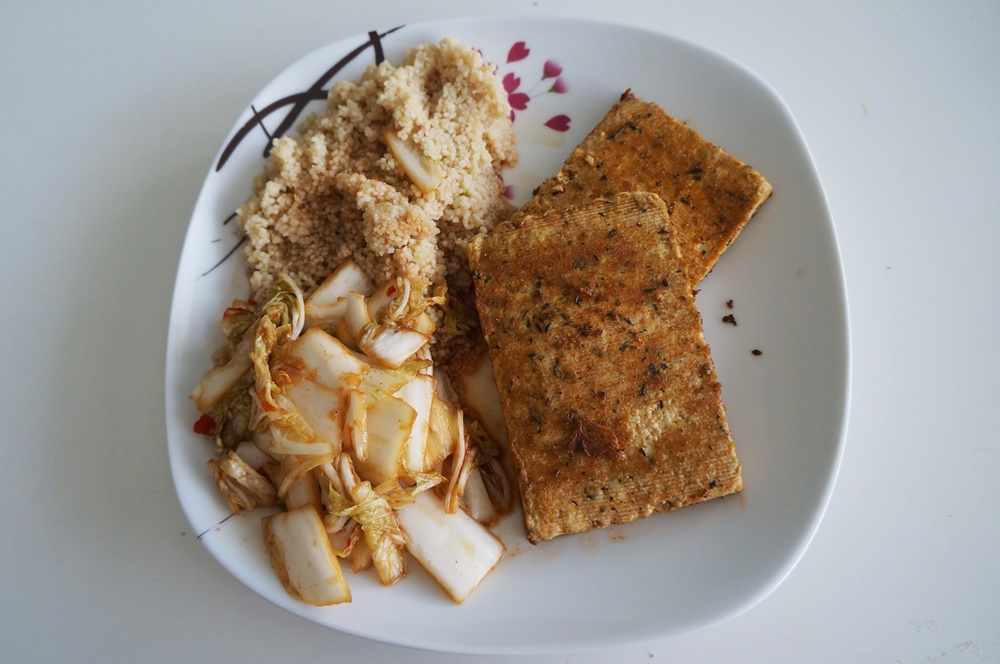 Here I just trew together some leftovers: The tofu was already seasoned (mediterranean style) and surprisingly good. I made some spicy chinese cabbage again and ate it together with some couscous. I just love couscous. It’s so easy to prepare (you don’t have to cook ^.^!) and really versatile. For example you can make salads with it or just use it as a side dish. You could even make a sweet dish with it, but I haven’t tried that. Yet. This was one of the few vegan meals I ever made. I was really stuffed after eating this! 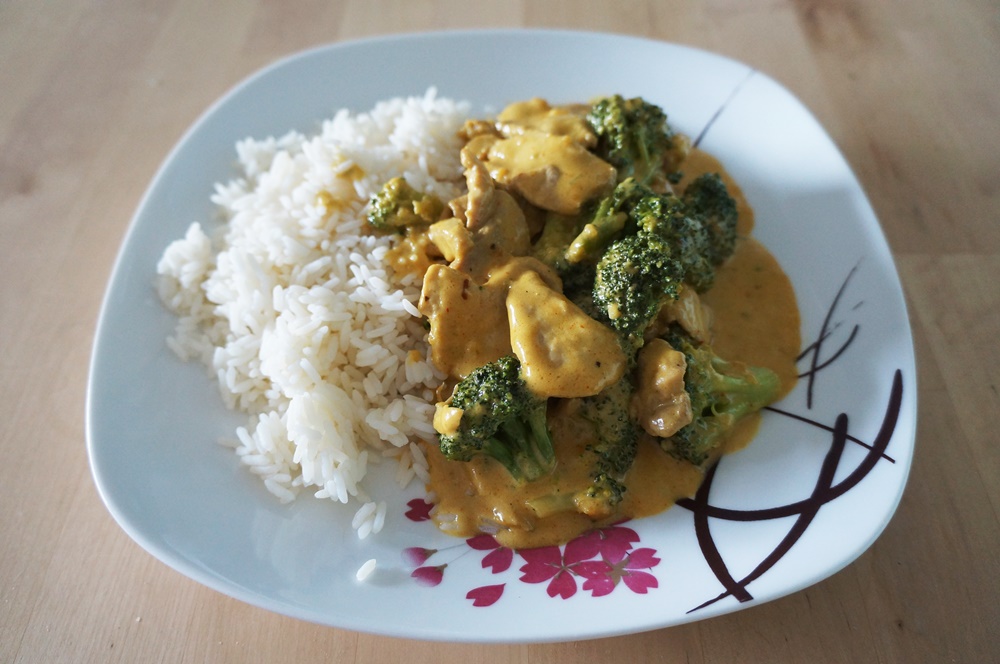 This was so good! I wanted to have something with curry, but most curry sauces you can buy aren’t just that good. So I made the sauce by myself without any recipe. I don’t know if I could recreate it again, but it wasn’t that hard after all. Together with some turkey stripes, broccoli and rice it was just perfect. I made it not long ago, but I could already eat it again. 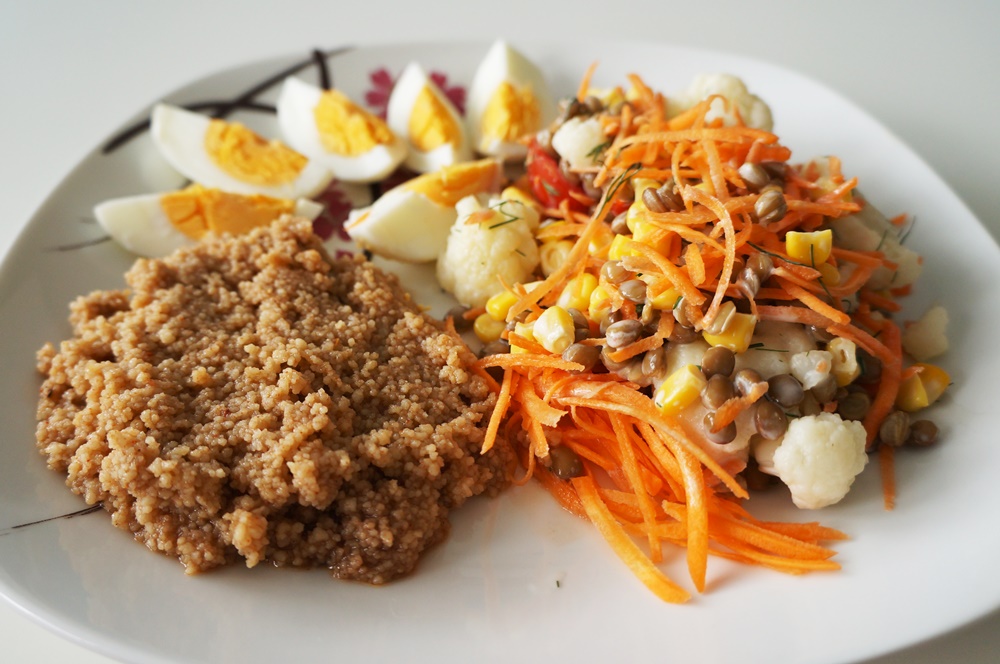 And finally something really easy and colorful made of leftovers. Some mixed salad (carrots, cauliflower, lentils, corn, tomatoes and dill) with couscous and hard-boiled eggs. A bit strange in that combination, but I liked it.

Okay, now I’m hungry. I really hope I can cook even more again now and more and more for Flynn. I want to try many new things in the future. I also want to give you some of my best recipes eventually, so stay tuned for more food!