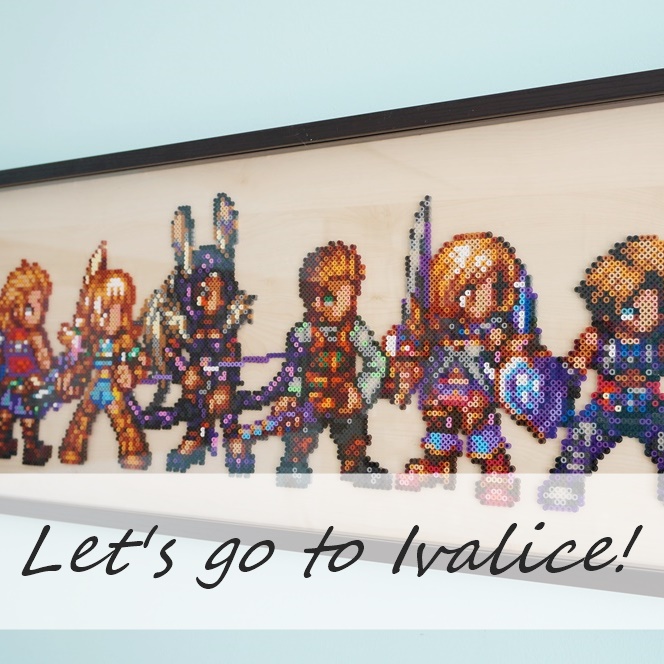 I already planned this post just some days before Flynn’s birth last year in July, but I never finished it because I just didn’t have any energy left last year ^.^°… But now, here it is:

Some years ago I made my first real Hama bead picture. It was a pixel Link and Zelda from A Link to the Past. We found an “A Link to the Past” Artwork of the Master Sword in the forest on the internet and printed it out, then glued the ironed bead pictures to the picture and put everything in a frame. If you’re interested, that’s what it looks like. At the moment it’s standing on top of a Ikea Expedit shelf in our entrance hall, because we just don’t have a better place for it XD.

But for the next picture, I wanted to do something bigger. We have some unused wall space in our living room so I decided to make a picture that you can put on one of the (turquoise) walls.

We bought some more beads and a pretty large Ikea picture frame (yes, about 90% of our household is from Ikea), which had just the right size. There had been some Leonardo da Vinci artworks inside, but we just ripped them off (I’m sorry Leo!). So next I had to find some great pixel art. First we thought about using a Final Fantasy X pixel art with all the characters. I found a really cool one from Deviantart user AbyssWolf, but when I counted the pixels and measured the frame I discovered that it sadly wouldn’t fit. But then I found this Final Fantasy XII character pixel art also from AbyssWolf, and when I checked out the measurement I was happy to find out that it’ll fit the frame perfectly. And since we still think that Final fantasy XII was a great game after all, I started… 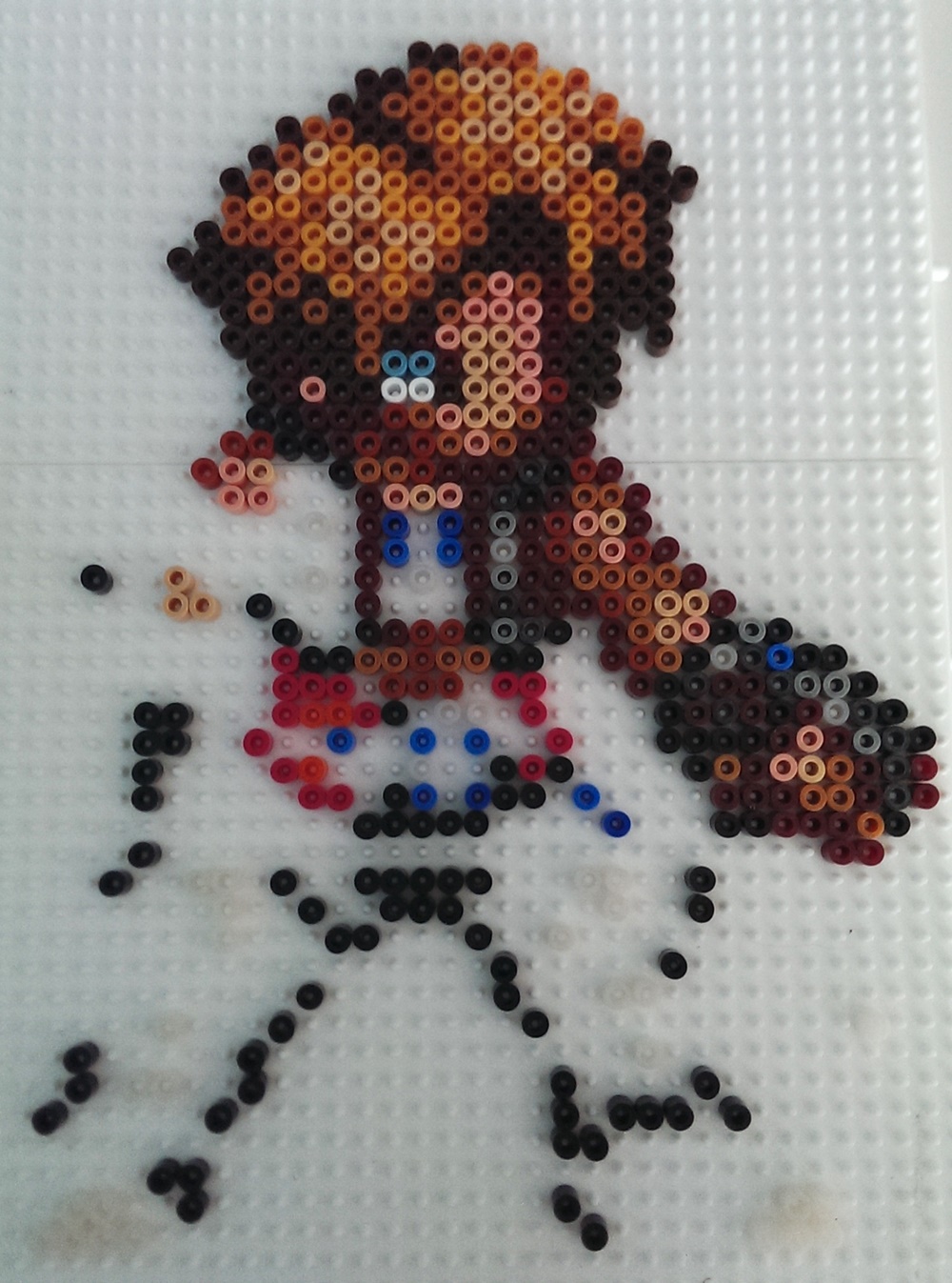 The beginning with Vaan. I think you can already recognize him at this state. But when I finished him, I just realized that if you iron the beads, the whole image will be mirrored later when you turn them around (I don’t like seeing the ironed side, I prefer the look with the beads how they look without ironing) thus meaning they’ll hold the weapons in their wrong hands and so on. So I started all over, mirroring all the beads so that the picture will be as it is. 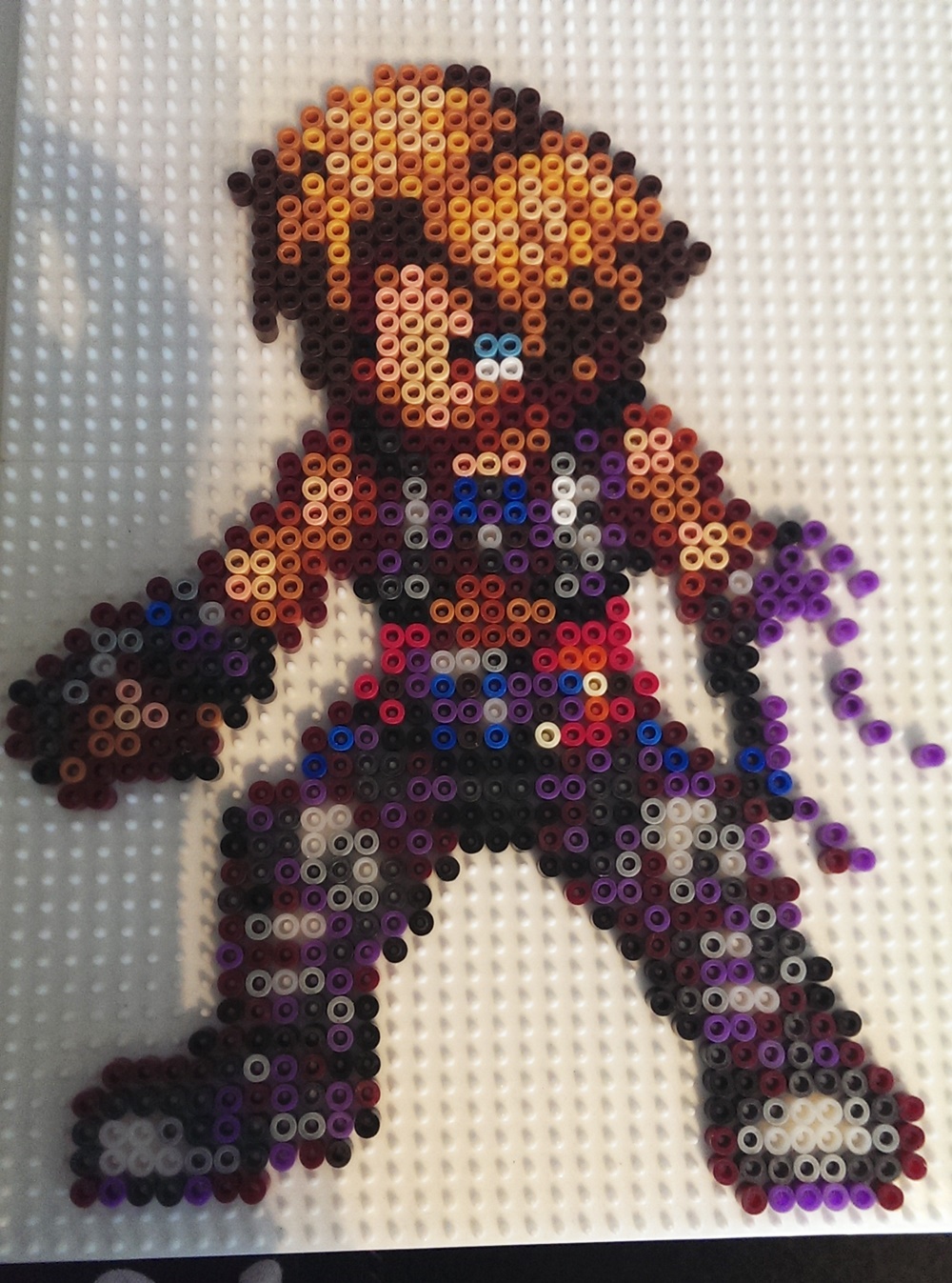 Yay, Vaan is finished! I also changed the color of some beads, to make it even better than before. In fact I spend most of my time getting the right bead colors and matching them against each other to create the best result with the limited choice of bead colors. The hardest part was to find the perfect brown colors. I always checked the hex color codes, because my eyes were tricking me more than once. Then I wrote down the selected bead color to each hex code, so that I won’t get confused, but it still happened from time to time. 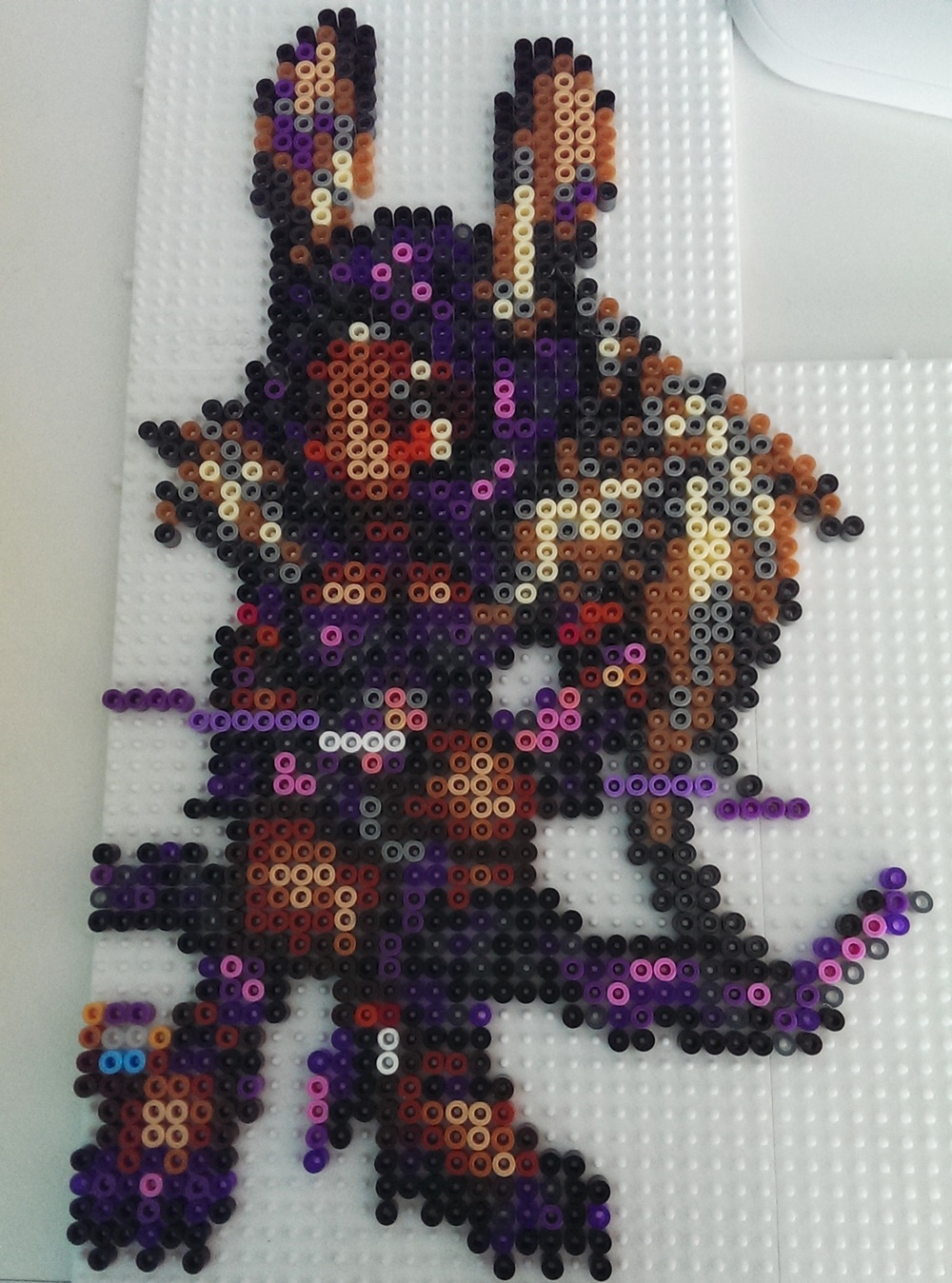 Fran was pretty hard as well. She is just made of purple, gray and brown colors. If I remember correctly it took me two days (not full days of course!) to decide which bead colors to pick for her. And she’s really big as well. I had to use three pegboards (? That’s what they are called in english on the Hama website) to fit her on. And I only own six boards in total. Fran is my favorite character in Final Fantasy XII, she’s just so cool and really cute together with Balthier! 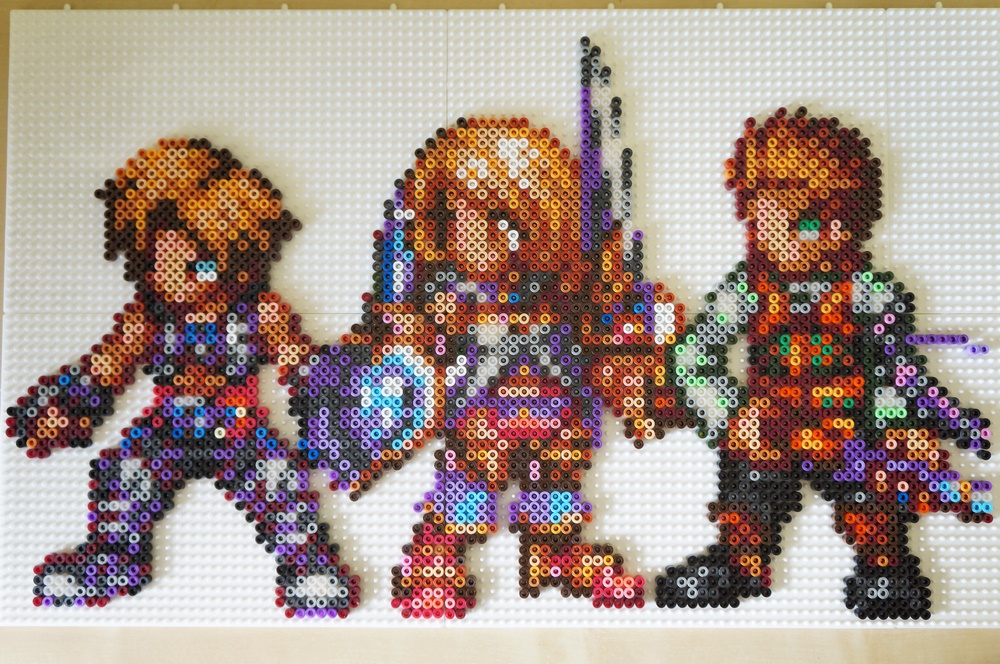 So because I only have six boards I already had to iron the first part with Vaan, Ashe and Balthier, so I can use the boards for the rest of the picture. During the process of putting together all of the Hama beads you just see seemingly chaotically arranged dots, but then when you finish the figures and take a look at them from some distance, you can see how all those little dots or pixel create a real picture. That’s always an impressive moment. 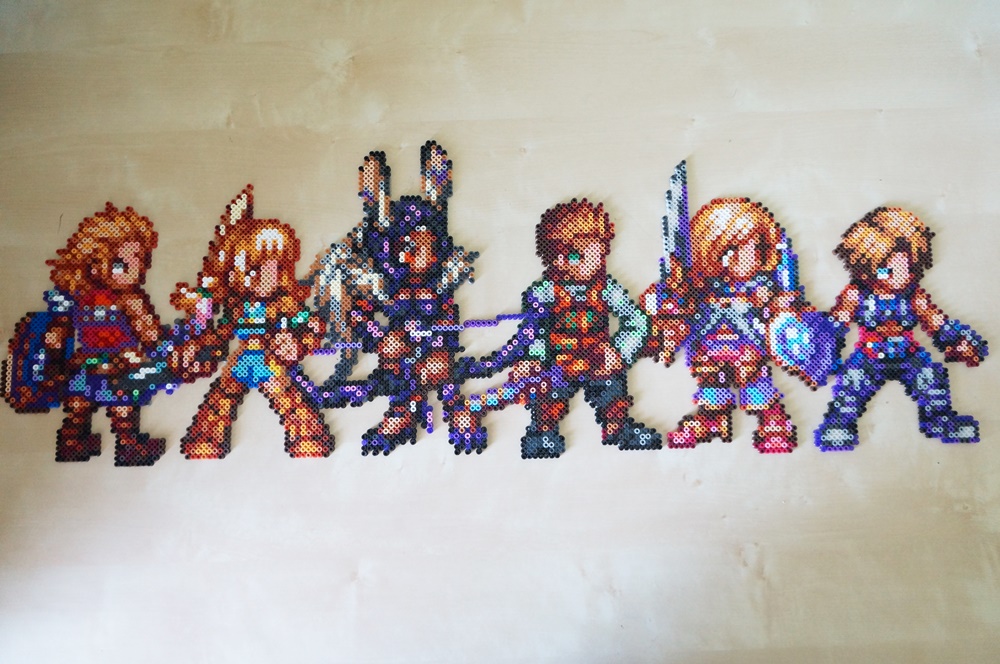 After around one month I finally finished arranging and ironing the whole picture. The actual work was pretty fast, it just took so long because it was really hard to find the right beads. We had to order some colors or I had to hunt them down in toy stores (with my big belly XD!). The ironing process itself was a little tedious: I was 9 months pregnant, it was hot as hell here in June and ironing big pictures with some fragile parts and cut-outs is not as easy as it seems. Some beads were turned sideways, some just didn’t want to attach to each other and things like that. I was really exhausted and happy when it was done! 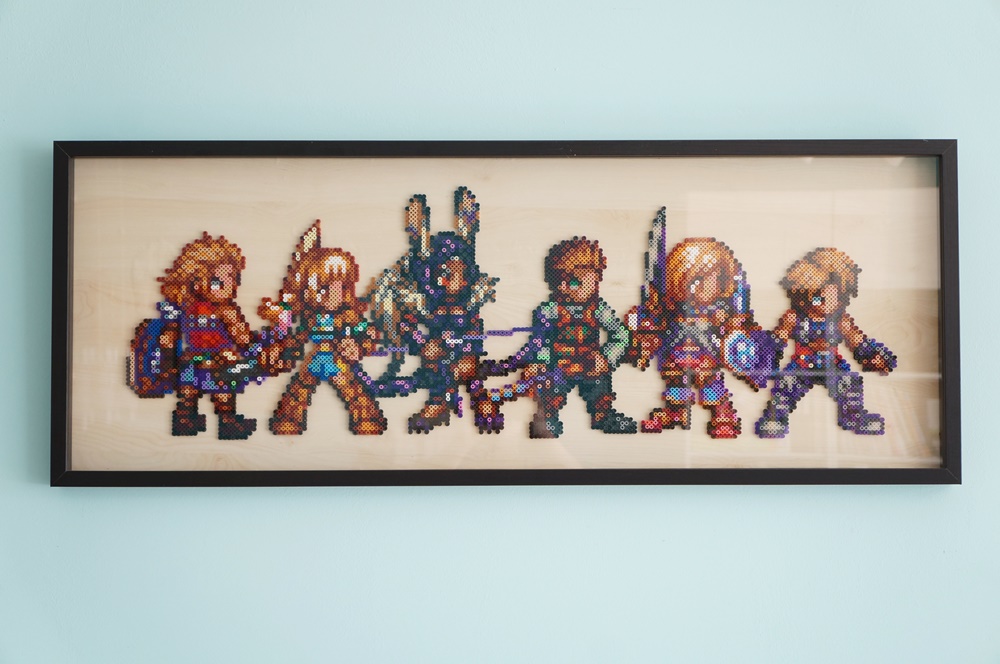 While thinking of a background, Tom and me both instantly thought about a desert theme (because it’s the first area you encounter in and around Rabanastre), so we were trying to find a big poster of a desert. But in the end we didn’t have much luck, and we got a poster with a night sky. When we wanted to frame the whole picture we checked out what the beads would look like with the poster, but the result was not as satisfying as we thought it would be. Then I had an idea: We still had some birchwood imitation adhesive foil for furniture here. We just sticked it to the background, where we ripped the Leonardo pictures off, and then glued the beads on and put everything back together in the frame and then hanged it on the wall: 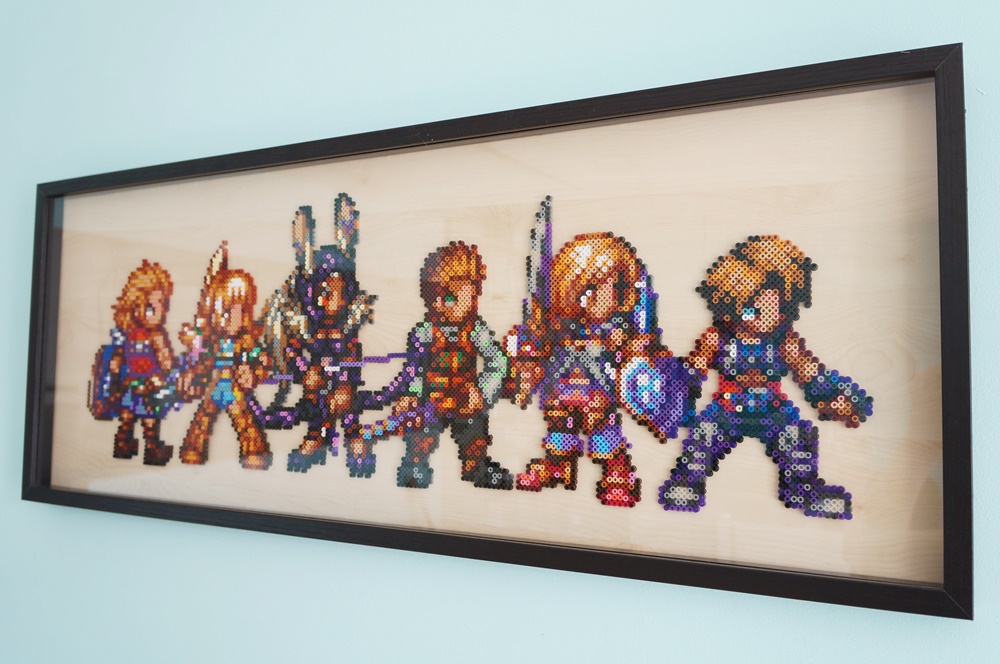 I think it looks great. The wood structure foil does in fact seem like desert sands and the color really adds to the nostalgic and somewhat pale style of Final Fantasy XII. That’s also why we left the frame black, like it is. It really matches the style and the color of the beads.

I’m really happy how this turned out. I absolutely want to do another Hama bead picture, but as you may guess I didn’t have any time for it yet. But first I need to find another great pixel art! Do you know of any great websites or artists that I might have to check out for my next big project?