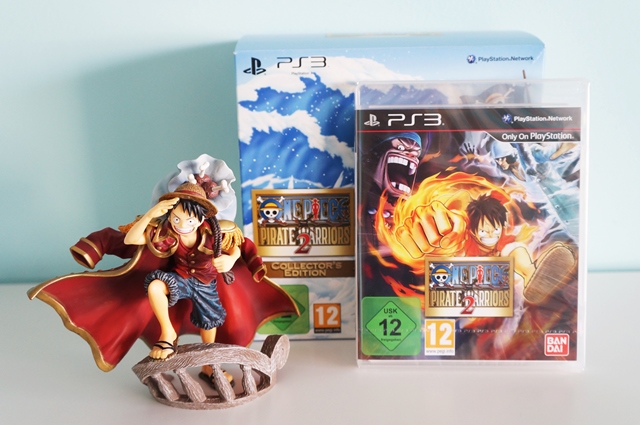 When there are so many new games coming out, it’s a sure sign that summer is over. There’s not only Final Fantasy XIV – A Realm Reborn and Tales of Xillia (and others would also add games like Saints Row 4 and Payday 2 to the list) that came out in the last past weeks, but there’s also the second One Piece Pirate Warriors game, which was released last week.

We got the Collector’s Edition, which comes with a great figure of Luffy. Here’s our unboxing video:

As you can see, this time we were better prepared and checked out and opened everything, before we filmed the actual video XD! The figure looks really good and lively in my opinion. Here are some photos of it: The game itself is a massive tactical fighting game (are these called like that?) like the Dynasty Warrior games for example. My favorite example for a game similar to this would still be Drakengard, even though Drakengard is also a lot different on some points.

From what I’ve seen it looks quite funny and I love that you can have the japanese voices. I don’t even know if you can change them, but who would do this anyway? Especially if you already watched the anime in japanese.

We still have so many more anime episodes of One Piece to watch. We started to watch them right from the beginning earlier this year and we are now somewhere around episode 70 I think. It’s really hard to catch up with an anime, if there are already over 500 episodes @_@.

Well, at the moment we took a break from watching One Piece, because we started watching Game of Thrones. This is so great and crazy and addicting and perfect in any aspect… Just why didn’t we start watching this earlier?